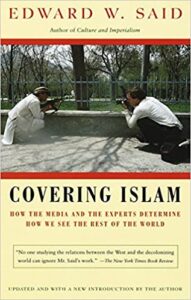 Edward W. Said, Covering Islam: How the media and the experts determine how we see the rest of the World, London, Routledge and Kegan Paul, 1981.

Covering Islam is a particularly topical book. It deals with the role of some Western news media, experts and intellectuals (especially in the USA) in shaping public perceptions of what is happening in the Middle East.

Said’s book is linked both in its themes and in its theoretical conception to his earlier studies Orientalism and The Question of Palestine. ‘Orientalism’ is for him the flaw which disfigures Western perceptions of ‘Islamic’ societies. ‘Islam’ is placed in quotation marks for it does not really exist, out there, ready to be discovered. Rather, according to Said, the very notion of ‘Islam’ is ‘in part fiction, part ideological label, part minimal description of a religion called Islam’ (p x). ‘Islam’ he argues has in the West a wholly negative image of ‘punishment, autocracy, medieval modes of logic, theocracy’ (p m).

Said follows Maxime Rodinson in suggesting what a more ‘responsible’ view of ‘Islam’ might look like. Briefly, this would distinguish between Muslim religious teachings embodied in the Koran, the conflicting interpretations of those teachings, and the complex shifting relations between orthodoxy and heresy (pp 53-55). As a general position, this insistence upon the specifics of history as against the timeless essences Said attributes to Orientalism is unexceptionable.

Why is the present image of Islam so negative? In part, as readers of Said’s other studies will know, this is held to have its roots in a fundamental attitude underpinning Western culture. However, as Sadik Jalal al’Azm pointed out in Khamsin 8, because Said’s concept of ‘Orientalism’ is so imprecisely dated it does itself function as a kind of essence, a permanent disabling feature of the Western mind.

But there is a more precise and delimited target too. For Said, the contemporary villain of the piece is the organisation of the intellectual field of Middle East studies and reportage. This field is basically constructed, he argues, in terms of an opposition between Orient and Occident, and the Orient emerges as a ‘malevolent and unthinking essence’ (p 8).

During the 1970s a number of crucial changes have propelled ‘Islam’ to increased prominence. The oil crisis of the mid-1970s fuelled a particular kind of interventionist strategic thinking in the West. The crisis in Iran, the Soviet invasion of Afghanistan and the unresolved question of the Palestinians’ future all combined to place the Middle East in the centre of the ‘arc of crisis’. Reportage flourished, and so did scholarship – of a kind which Said finds seriously misleading. Its limits lie in the fact that ‘discourse on Islam is, if not absolutely vitiated, then certainly coloured by the political, economic and intellectual situation in which it arises’ (p xvii). But then, as Said himself recognises, albeit in passing, exactly this point could be made about the dominant interpretations of Communism in the West. And what would a discourse free of such determinations look like? How is it to be achieved? There is an – unsatisfactory – answer to these questions, as we shall see.

At root, what Said calls ‘orthodox’ knowledge about Islam stems, he argues, less from intellectual curiosity than from the needs of Western power. Hence, he is highly dismissive of a great deal of US scholarly research which he sees as either an instrument of government policy or as suspect because of its sources of finance (such as the Pahlevi Foundation). The lack of a widespread popular knowledge about Islamic societies, the absence of outstanding interpreters able to popularise against the conventional wisdom and the ignorance of media personnel puts the intellectuals and geo-political strategists into a commanding position. They provide for the mass media, and therefore for the widest audiences, ‘what is most easily compressed into images’ (p 32). Thus, in this determinstic picture, the cultural apparatuses intermesh to produce a homogenised, consensual view. The mass media, as creatures ‘serving and promoting a corporate identity’, cannot escape a ‘corporate’ (i.e. capitalistic?) logic. Said supports his argument with case studies of, for example, the media coverage of the Iran crisis and of the Death of a Princess controversy.

However, counterposed to this picture of inevitability, there is another. Some of us, Said included, must be allowed to escape ‘the intellectual regulation of discourse about distant and alien cultures’ which ‘positively and affirmatively encourages more of itself’ (p 148). How so?

Here the thrust toward explaining intellectual production in a cultural materialist perspective gives way to a much less satisfactory argument. Said argues that an ‘antithetical knowledge’ is possible which is ‘produced by people who consider themselves to be writing in opposition to the prevailing orthodoxy’ (p 149). This opposition includes some younger scholars, some older US scholars (Algar, Keddie), some writers based in Europe (Hourani, Rodinson), and antiwar and anti-imperialist militants (e.g., I.F. Stone). Said also commends the work of Eric Rouleau of Le Monde as a model for US journalism to follow, but he does not classify it as ‘antithetical’.

Those who are exempt from the distortions of Orientalism seem to achieve their glimpse of the truth because special conditions apply. In France, for instance, the burdens of imperialist interventionism are past (so it’s argued) and a more enlightened outlook permits the space for Le Monde to be dispassionate (What about the rest of the French press?). At another level entirely, we seem to be talking about the moral and intellectual qualities of individuals. And, in actuality, Said’s ultimate refuge is an individualist and subjectivist justification for the truth. He is a man with a mission who believes that the reform of distorted thinking may be changed by acts of will and consciousness.

What is needed, argues Said, is ‘respect for the concrete details of human experience, understanding that arises from viewing the other compassionately’; we should follow the ideal of ‘uncoercive contact with an alien culture through real exchange, and self-consciousness about the interpretative project itself’ (p 142). This argument recalls strongly the position taken by the German social theorist Jürgen Habermas, who argues that ‘non-distorted communication’ is possible where those engaged in discourse operate without the threat of violence or the constraint of power relations in which some dominate others. It is hard to envisage such a world, and even antithetical knowledge may be harnessed to the uses of some power. Moral integrity is no safeguard against the abuses of a propaganda war; nor is self-consciousness a guarantee of truth as it can obviously be mistaken about the springs of action. We are all damned to wander around the perimeters of the hermeneutic circle: the interpreters shall be interpreted, unto the nth generation.

Despite these reservations, Said has written a useful book which has stimulated a lot of interest. Perhaps the construction of ‘Islam’ is less enduring than he thinks. He says, early on in his text, ‘For the right, Islam represents barbarism; for the left medieval theocracy; for the centre a kind of distasteful exoticism’ (p xv). At the time of writing, as the events at the Chatilla and Sabra refugee camps are beginning to be assessed, it would seem that the label of ‘barbarism’ has now been affixed to Israel.