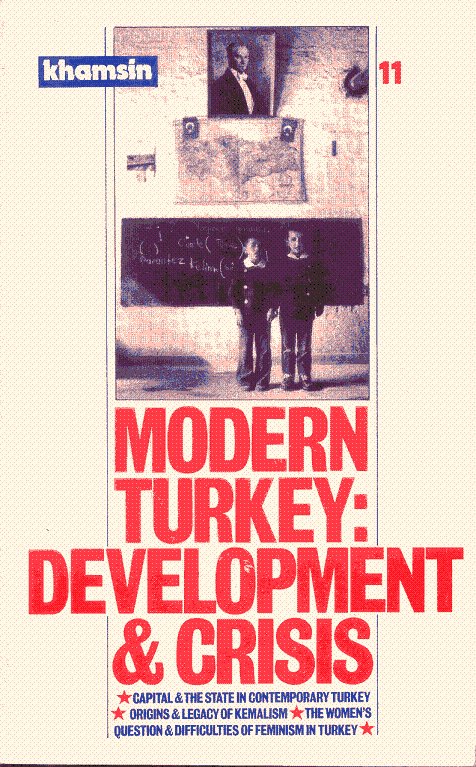 The full content of this issue is also hosted at Libcom.org. Yet to be uploaded to this site:

A group of leftist Turkish intellectuals and activists agreed to impart to us in Khamsin some of their knowledge concerning their country. At our request, they later agreed to put together this special issue of Khamsin, wholly devoted to Turkey.

The Origins and Legacy of Kemalism ‒ A. Ender

Analysis on the role of Kemalism ‒ a specific form of Turkish nationalism ‒ in overseeing the transition from the Ottoman Empire to the Turkish Republic, demonstrating its reactionary nature in annexing Kurdistan and repressing its own working class.

This article examined the extent and nature of women's oppression in Turkey, the attempts of secular-nationalist movements to improve women's conditions and outlining the possible shape of a future feminist movement in the country.

Historical survey of the Turkish left and workers' movement, focusing particularly on the 1960s-70s and the slide into guerrilla warfare, looking both at the strengths and fatal weaknesses of the two interconnected movements.

Since the end of the Second World War Turkey has been firmly in the orbit of the Western alliance though in the past decade a number of events have occurred which have strained the relationship with the West. At present Turkey is surrounded by actual or potential conflicts with Greece, Cyprus, Syria, the Soviet Union, and to the east Iran and Iraq – both with dissatisfied Kurdish minorities.