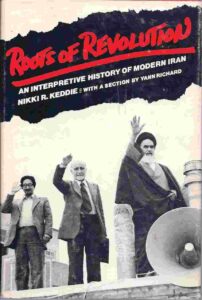 Since 1979, books on Iran have been coming out thick and fast. As the course of events in that country seemed to show a consistent tendency to contradict and baffle even expert commentators, an increasing body of literature on Iran has flooded the market, ranging from hastily put together journalistic accounts to very valuable historical works. Nikkie Keddie’s recent book Roots of Revolution, is a singularly useful and welcome addition.

As a historian of modern Iran, with her particular interest in the role of the ‘ulama‘ in the nineteenth and twentieth centuries, she was in a unique position to bring her historical insights to bear in understanding the present. The book offers a concise, rather brief and largely descriptive history of Iran over the past two centuries. Although some of the material in the early chapters is covered by a number of existing books and articles on Iran, it is still very valuable to have a source book that covers this whole period in its historical continuity.

More significantly, the book is unique, amongst similar histories of Iran, in its systematic treatment of two topics. One concerns the situation of women in Iran, a topic absent from most other accounts and covered for each period in this book. The second concerns the Babi/Baha’i movement. Iranian historians, under the ideological pressure (as well as potential physical threat) of the Islamic clergy who consider the Babis and Baha’is as heretics, often make the most pejorative references to this movement, or ignore it altogether. This is particularly true of works printed in Persian in Iran. To this day a comprehensive account of this movement and its place in the nineteenth-century history of Iran is missing. Nikki Keddie’s account offers an initial assessment. That a disproportionately large number of orators and political thinkers of the 1906 Constitutional Revolution came from Azali and Babi backgrounds should provide the Iranian historians of that period with a phenomenon to be explained rather than avoided or denied.

The various chapters in this book are somewhat uneven in presentation. The earlier ones are much richer in analytical and interpretive insights. The chapters covering the Pahlavi period become more narrative. This is not surprising, considering Keddie’s previous works on late-nineteenth century Iran and the Constitutional Revolution.

The most novel and currently topical chapter is Chapter 8, ‘Modern Iranian Political Thought’. It covers the history of political thought in Iran in its tortuous evolution from what Keddie refers to as ‘the concern of many Iranian leaders and thinkers… [about] catching up with the West’ (p 186) to the current preoccupation with rejection of the West. Simplistic though it may seem, I would argue that the contrast is a useful one in placing various ‘historical controversies’ in context and for an overall evaluation of the contributions of a number of contemporary literary and political thinkers of Iran.

One such controversy concerns the respective role of the ‘ulama‘ and secular intellectuals in the Constitutional Revolution. This question is raised and discussed in another work by Nikkie Keddie.1 However, the problem is too often posed by one side in terms of the importance of the clergy in backing the Constitutional Movement, and on the other side much effort is put into demonstrating that there were also significant anti-constitutionalist currents amongst the clergy. This is not very fruitful. Clearly both tendencies existed. It is also undeniable that the clergy had vast influence both on the mass of the population as well as on the political atmosphere of the time. The extent of such influence is partially reflected in the fact that even secular intellectuals and political thinkers often felt obliged to present their politics in Islamicised language. Despite this, what is striking in the constitutional period is the ideological predominance of secular political ideas. Even the ‘ulama‘ were giving their backing not to an Islamic political order but to a constitutional regime whose ideas had clearly and admittedly originated from Europe.2

This predominance of secularism in politics is symbolically reflected in the rejection of the original farman of the shah, declaring a constitutional regime in which the parliament was referred to as an ‘Islamic Assembly’. The Constitutionalists returned the farman, asking for this to be changed to a ‘National Assembly, as we do not see ourselves involved in a matter of religion’.3 Seventy odd years later, the exact opposite took place. Although the new Iranian constitution referred to the parliament as the ‘National Consultative Assembly’, in the first session of the Assembly this was changed by an overwhelming vote to ‘Islamic Consultative Assembly’.

More significantly, the constitution of 1906 was modelled after European (in particular the Belgian) constitutions. The whole direction of administrative and political reforms was towards setting up a largely secular state; although Islamic law was retained, it was integrated into the civil and criminal codes. Again, today the direction of change has been reversed. State institutions such as the judiciary are being dismantled to be replaced by religious courts, the criminal code is replaced by the Bill of Retribution etc.

This contrast is brought out clearly in Chapter 8 of the book. Even the pan-Islamic currents of the nineteenth century shared the same goal; that is, they saw return to Islam not as a means of rejecting the West but of catching up with it. As Keddie notes, ‘With Jamal ad-Din [al-Afghani] and his followers… this reinterpretation had a modernist and reformist bent: Western-style law and science, sometimes constitutions, and other reforms were found in the Quran. Today, however, the movement in Iran is only in part reformist; it is carried out more by ulama than by independent intellectuals and stresses the literal following of many Quranic rules. This greater conservatism after a century may most briefly be explained by saying that Jamal ad-Din and his Iranian followers were reacting against a traditional, scarcely reformed governmental and religious structure and naturally thought that Iran’s problems might be solved by interpreting Islam in ways to bring it closer to the more successful, stronger, and better functioning West. Khomeini and his followers, however, reacted to a situation where Iran was felt to be a junior partner or puppet of the West, particularly of the United States, and in which cultural and economic Westernisation of a certain type was occurring at breakneck speed with little regard for human consequences. When no traditional or Islamic government had existed for a long time and the formal power of the ulama had been curbed, it was easy to imagine that a return to an idealised Islam, so far past that no one remembered it, could solve Iran’s problems…’ (pp 188-89).

During the Constitutional period, there were even important anti religious anti-Islamic (partially anti-Arab) currents amongst the nationalists and constitutionalists. For those political leaders and thinkers who paid lip-service to religion, the reference to Islam was purely utilitarian: they saw it as a necessary concession to avoid the obvious clash between their ideas of a secular state with the Islamic institutions.

In this context, it is possible, and politically necessary, to characterise the intellectual and political evolution of the post-1960s, represented by such figures as Jalal Al-e Ahmad, ‘Ali Shari’ati and Khomeini, as wholly regressive. It is not clear why Nikki Keddie, who more than anyone else had been drawing our attention to the role of the clergy and Islam in Iranian history and in the recent anti-Shah movement, is reluctant to draw this conclusion. She says, ‘as on many questions in many periods, it is wrong to characterise the outlook of the ulama leadership at this time either as purely “reactionary”, as did the regime and most of the foreign press, or as “progressive”, as did some Iranian students abroad’ (p 157). Further on in the same paragraph she seems to imply that Khomeini’s opposition ‘to dictatorship and to Iranian dependence on the US’, in itself was necessarily progressive.

Others would also put his opposition to Israel on the credit side. But as the experience of Iran has shown, not any opposition to something bad is necessarily good. To oppose a military dictatorship in order to put in its place a clerical dictatorship, to oppose dependence on the US in order to replace it with retrogressive national isolation that destroys the existing socio-economic fabric of the country, to oppose Israel from an anti-semitic standpoint – how could any of these stands be construed as somehow ‘progressive’?

Similarly, an evaluation of the intellectual contribution of Al-e Ahmad can only be done in a historical perspective. As is noted in the book, ‘Al-e Ahmad was, in the 1960s, the intellectual leader of a new generation of Iranian thinkers’ (p 203). In fact from a secular intellectual direction he represented what Shari’ati represented from a religious direction. His essay on rejection of the West, Westoxication, became the intellectual bible of a generation. In this rejection, Al-e Ahmad turned against the revolutionaries and reformers of the Constitutional period and defended the most reactionary currents, as noted in the book, when summarising Al-e Ahmad views: ‘Islam, weakned by divisions betwen Sunnis and Shi’is, by mystical groups, and by Babism-Bahaism, was vulnerable to imperialism. Iranians succumbed to the images of “progress” and played the game of the West. Al-e Ahmad attacks nineteenth-century Westernisers like Mirza Aqa Khan Kermani, Malkom Khan, and Talebzadeh, and defends the anti constitutional Shaikh Fazlollah Nuri for upholding the integrity of Iran and Islam in the face of the invading West’ (p 204).4

The author (Yann Richard), quite accurately in my opinion, characterises the evolution of Al-e Ahmad as an evolution from socialism (he was in the Tudeh Party for a time) to a political Islam (p 205); yet he insists that, ‘this does not mean that Al-e Ahmad was reactionary’.

Provided that one is not throwing around the word ‘reactionary’ as an insult but as a historical characterisation, I fail to see how else such an evolution could be characterised. Significantly, this was not just Al-e Ahmad’s individual evolution, but that of a whole generation. It was this layer of the intellectuals who paved the path for the ideological hegemony of Khomeini’s Islamic government. In this, they played the reverse of the role that the pro-constitutionalist clergy (like Na’ini) had played seventy years earlier. The whole book, particularly Chapter 8, stands as a testimony to and history of this reversal. Nikki Keddie has provided us with a valuable book tracing this political trajectory in modern Iranian history – even though she seems unwilling to draw such conclusions openly.