Skip to content
Yuval2022-12-08T13:02:24+02:00
A year ago we established the Matzpen video channel on YouTube.  In addition to Eran Torbiner’s documentary film about Matzpen (with subtitles in English, Arabic, German, Italian and Polish), it contains interviews and interview clips filmed by Eran Torbiner with members of Matzpen (several of them with English subtitles), as well as two videos (in Hebrew and Arabic) produced by the Revolutionary Socialist List for the Knesset elections in 1973. 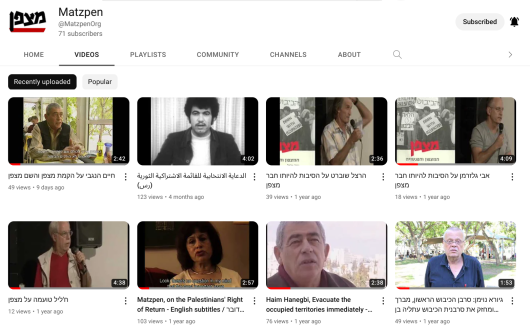 The Socialist Organization in Israel, founded in 1962 and known by the name of its journal Matzpen (Hebrew for “Compass”), opposed all forms of human exploitation, oppression and discrimination; viewed Zionism as a colonizing project, and strove for Arab-Jewish coexistence based on full equality; supported implementation of the Palestinians’ human and national rights, and called for solving the region’s national and social problems through revolutionary struggle for a united socialist Arab East.

On this site we have uploaded all the original material published by Matzpen since its foundation, as well as video interviews and personal stories by or about members of the organization after it had ceased to exist as an active organization.

We have organized the material in three interlinked sites: Hebrew, Arabic and English. These are not ‘translation’ sites, but rather collections of material as it was originally published in these three languages. The bulk of the Hebrew and Arabic content originally appeared in issues of Matzpen published in Israel; the English (and some French) contents appeared in issues of Khamsin – a journal among whose founders and editors were several Matzpen members – and other related publications published in the UK and Europe; articles included in the anthology The Other Israel published in the US; and articles translated from Matzpen.

Our aim is not only to provide online historical archive, but also to alert the reader to the relevance of the analyses and opinion articles which appeared in Matzpen over its years of existence to the current political situation. To receive such alerts, please join the Matzpen facebook page. 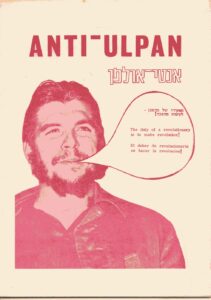 After the June 1967 war, hundreds and thousands of young left-wing Jews flocked to Israel, attracted by military victory of a “small democratic and socialist Jewish state surrounded by enemies”, to join the Zionist enterprise that was seen from a distance as a model of progressive society. Many of them were welcomed for several months in Hebrew-learning seminars called Ulpan that also provided them with reinforcements for their illusions about Zionism. But when they went out into the Israeli reality, many of them soon encountered the gap between the image they had of zionist Israel, and its colonial practice, beastly capitalism, nationalist arrogance and Jewish racism. Sooner or later they realized that they had been wrong to come here – and left. Many others needed a little “assistance” to sober up from their illusions, and in 1969 Matzpen tried to give them that assistance in the form of a booklet called “Anti-Ulpan”, in English, French and Spanish. There were those who on their way out still tried to find a place for themselves here and joined Matzpen, but only a few of them remained in the country – and in Matzpen – for long.