This book consists of statements issued by the Israeli Socialist Organization and articles written by its members during the past five years. While the articles written by individuals reflect the general position and spirit of the ISO, the organization is responsible only for the formal statements issued in its name. Minor changes and updating were made in most of the articles, however; some of them were specially rewritten for this publication. I would like to thank the following people for permission to use their articles in this book: Emmanuel Dror, Haim Hanegbi, N. Israeli, Eli Lobel, Moshé Machover, Akiva Orr and Abu Sa’id.

I would like to thank for their invaluable assistance in the editorial work of this book my American comrade, Philip Martinson, and my Israeli comrades, E. Aminov, M. Varshevsky and E. Farjoun. I would also like to thank the staff of Doubleday, especially Alice Trattner and Janet Kafka for their help. 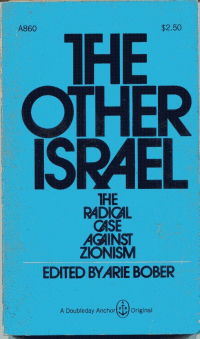