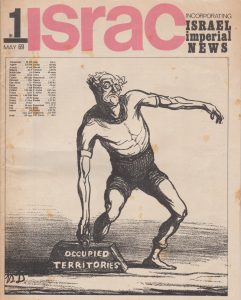 The last issue of the Tunisian weekly Jeune Afrique contained a news-item which is at first sight startling. “More than one Israeli would, I expect, co-operate with El-Fatah”, states, incognito, someone described as one of the leaders of the Arab terrorist organization. “We have anti-Zionist organizations in mind. Some of them are actual Fedaayen, others supply us with information and shelter . The El-Fatah organization has contacts with certain Israeli organizations such as the New Communist List and Matzpen”.

Jeune Afrique, which is financed by the Bourguiba government, is generally considered a reliable source. One may assume that the statements it ascribes to one of the leaders of the Palestinian saboteurs, were actually said by him.

Whether this man stated a truth or merely employed the technique of “intoxication” (misleading the enemy by false information) as part of the psychological warfare of the Palestinians against Israel, is another matter. In any case, these matters merit the careful attention of the appropriate Security bodies in Israel.

As far as we know there is no organic link between the New Communist List (which split off the Israeli Communist Party) and the Palestinian terrorist organizations. Messrs Vilner and Tuby, who represent this list in Parliament, hold views identical with those of the USSR on the Middle-East in general, and on Israel in particular.

One could argue that such views might create a mutual understanding between the Palestinian terrorists and Arab or Jewish Communists in the New Communist List [Rakah]. That would be a dangerous assumption unsubstantiated by any actual proof of cooperation. Moreover: the Palestinian saboteurs do not receive any direct support from any Communist Party in the world, not even from the Russian one. Representatives of El-Fatah have, indeed, visited Moscow; met Soviet leaders, asked for assistance, money, weapons – but so far they have not received any. The Russian arms which they possess and which comprise most of the booty taken by the Israeli Army whenever a gang is wiped out are given or sold to them by the Arab States or by various third parties.

However, recent rumours, and one must stress that these are only rumours, not substantiated information, say that among the Arab youths detained after the explosion in the University cafeteria in Jerusalem were two students linked with, or members of the New Communist List. Even if these rumours could be confirmed it would still be impossible to draw far-reaching conclusions. The students could join El-Fatah and carry-out sabotage activity, independent of their membership in the Communist Party of Messrs Vilner and Tuby. In any case, this issue merits a thorough investigation.

The Matzpen group, however, and its contacts with the saboteurs mentioned by the Palestinian spokesman in Jeune Afrique, are an entirely different matter. It is hard to find out the nature of the group calling itself Matzpen, or its size. Two Israelis resident in London, Messrs Shimon Tzabar and Akiva Orr, have established something like an extension of this group there. They publish a paper called “Israel Imperial News” which libels the State and defames it among the gentiles. They express views about Israel which are, indeed, identical with those held by the people who planted the bombs in the Supermarket and the cafeteria.

There is no doubt that there, abroad, there is a close contact between this Israeli group and various Palestinian elements. It is said that they are influenced by Communist China, and generally, as far as ideology is concerned, are close to the thoughts of Mao Tse-Tung.

In Israel this group numbers some tens of known Arab and Israeli students, and a few dozen other unknown people. They smear the walls of houses in Jerusalem with slogans like “Down with the occupation“, “Down with the occupationists”. They demand the abolition of Zionism and the Jewish State as such, like El-Fatah they raise the slogan of a State that will accomodate both Jews and Arabs. It is not known whether they demand that every Jew not born in Israel should be expelled, as do the Palestinians…

Two foreign journalists who visited Jerusalem and later the Territories this week told me about the energetic activity of the Matzpen people. When they heard that foreign journalists (a busload!) had arrived at the University they infiltrated the group, and some spent a whole day in the company of these journalists who were naturally hunting for sensations in the holy land.

Indeed, the guests from abroad were shocked (they came to Israel at the expense of the Israeli government, and their tour was conducted by a guide from the Foreign Office) to hear from the students, who presented themselves as members of Matzpen, basic political assumptions identical to those which they had heard, shortly before, in Amman, and in the El-Fatah training camp: “Do not believe the Israeli government’s official spokesmen, they talk about peace, but mean war, they are imperialists, they aspire to further expansion of the borders of the Zionist State, they are prepared to massacre all Arabs”, said these youths to the journalists.

It cannot be said that the journalists were impressed by such views. In any case, they realize that this little group constitutes less than a majority of Israeli students, and is not representative of widespread opinion in Israel.

And yet, one would do well to pay attention to this phenomenon. It is a good thing that we have a democracy which even permits the existence of bodies which deny our very existence. However, there is a certain difference between Democracy and Anarchy. The time has come to draw some limits. It would be proper to draw these limits in such a way as to leave no place for errors which might prove fatal.

(see also Letters to Other Editors)

[ISRAC(A) 1, next item: Our Responsibility towards the Jews in the Arab Countries by Uri Harari]