Letters to other Editors

Representatives of the “second sex” are among the determined participants demonstrations and among the supporters of saboteurs and terrorists. They are behind the disruption of studies and commerce, they participate in unauthorized demonstrations and in laying mines and actively belong to the “Movement for the Liberation of Palestine”.

They incite girls to shout Arab propaganda slogans, to wave flags and throw stones. It is not worth dispersing women’s demonstrations with clubs and sticks. Why should we hit the women rioters?

I imagine that we could achieve our aims even if we used more accepted and humane methods, e.g. tear gas.

The problem of the Arab refugees

I would appreciate a reply to the question which probably torments many of us: Why don’t we try to solve the refugee problem, even if partially, in the Sinai peninsula, an area within our grasp. I imagine it would be possible to mobilise international capital resources for the solution of this problem, which is the real source of the Israeli-Arab conflict.

“Life with 1.3 million Arabs is a reality for which one has to establish a defined policy” says Shimon Peres M.P. in Haaretz of 7.1.69. It is necessary to create practical Jewish-Arab coexistence. I would like to emphasise one characteristic of the ‘democrats’ among the members of the Movement for the Annexation of the Territories. The ‘liberal-minded’ programme does in fact suggest that one must not demand that the Arabs become like Jews.

Mr. Peres M.P. is in favour of creating the conditions for a pattern of normal life and technical and social progress. We must, therefore, explain to our neighbours that Israel is a free state where everything is allowed, except violence and incitement.

This programme, which is in favour of normalised life, progress and liberalism, did not even mention the problem of the civil rights of these 1.3 million Arabs. Will Mr. Peres grant them or not?… Is it merely by chance that he did not mention this detail, or is his suggested solution really an attempt at co-existence a la Rhodesia?

Addressed to the editor of Jeune Afrique

In your issue no. 427 (10-16 March 1969) your correspondent Miss. A. Frances reports an interview with a leader of Al Fatah. The report contains the following exchange:

(Are there some anti-Zionist Israelis already fighting for El Fatah?

“More than one thinks”, El Fatah leaders let it be known. Some are even “fedayine”. Others give information and shelter commandos. Moreover, there are contacts in an individual capacity with certain organizations, like Rakah (the anti-Zionist Communist Party) or Matzpen, an extreme left-wing group made up of pro-Chinese and ex-Trotskyites.)

As one of the most veteran members of Matzpen (although I am neither a pro-Chinese nor an ex-Trotskyist — simply a revolutionary socialist…) I would like to make the following comments.

The struggle of the Palestinians for liberation is a serious thing, far too serious to be a hunting-ground for sensation-loving journalists.

I have no way of finding out whether the “leaders of Al Fatah” really gave your correspondent to understand what she claims to have understood; but judging by the many inaccuracies which I found in her previous reports I tend to believe that the above-quoted passage is not so much a report as a free creation of her mind.

What I find most regrettable is that instead of trying to report correctly and intelligently about the political views and activities of Matzpen, your correspondent chooses to spread fairy tales about contacts which members of our organization allegedly have a titre individual. This is worse than ordinary gossip – it is the kind of irresponsible talk which does not help the Palestinian resistance or the anti-Zionist democrats in Israel, but only the enemy, the Zionist establishment. 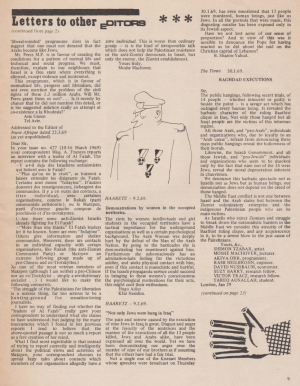 Demonstrations by women in the occupied territories

The riots by women intellectuals and girl students in the occupied territories have a tactical importance for the underground organizations as well as a certain psychological background. The Arab Woman was deeply hurt by the defeat of the Man of the Arab Nation. By going to the barricades she is demonstrating her resentment against him. Furthermore she subconsciously has an admiration-hate feeling for the victorious soldier, and seeks physical contact with him, even if this contact is masochistic and hurtful.

If the Israeli propaganda service could succeed in bringing to these women’s consciousness the psychological motivations for their acts, this might cool their enthusiasm.

“Not only Jews were hung in Iraq”

The pain and sorrow caused by the execution of nine Jews in Iraq is great. Disgust and anger at the ferocity of the sentences and the manner of the executions of all the 13 people killed, Jews and Arabs alike, have been expressed all over the world. Yet we have been demonstrating our anger over the murder of nine of our brothers as if assuming that the others have had a fair trial.

Not a single one of the Knesset Members whose speeches were broadcast on Thursday 30.1.69, has even mentioned that 13 people were murdered, human beings, just like us Jews. In all the protests that were made, this disgusting murder has been exposed only in its Jewish aspect.

Have we not lost some of our sense of proportion? And in view of this was it sensible to denounce the Pope for having reacted as he did about the raid on the Christian capital of Lebanon?

The public hangings, following secret trials, of 14 people – whether innocent or guilty is beside the point – is a savage act which has outraged every human being. It revealed the barbaric character of the ruling Baathist clique in Iraq. Not only those hanged but all Iraqi people are the victims of this inhuman regime.

All those Arab, and “pro-Arab”, individuals and organizations who, due to loyalty to an “Arab cause” refrain from denouncing these mass public hangings reveal the hollowness of their morals.

Likewise, the Israeli Government, and all those Jewish, and “pro-Jewish” individuals and organizations who seem to be shocked only by the fact that nine out of the 14 were Jews, reveal the moral degeneration inherent in chauvinism.

We denounce this barbaric spectacle not as Israelis nor as Jews but as human beings; our denunciation does not depend on the creed of those hanged.

The Middle East conflict is not one between Israel and the Arab states but between the Zionist colonizatory enterprise and the indigenous Palestinian people who are its main victims.

As Israelis who reject Zionism and struggle to break down the nationalistic barriers in the Middle East we consider this atrocity of the Baathist ruling clique, and any acquiescence in it, to be a severe blow to the just cause of the Palestinians.

To the editor of the Israel imperial News

Just by chance we had the opportunity of reading your magazine Israel Imperial News and we consider that your work is very important because it shows up the brutal face of the Israeli domination that is similar to any other domination in history.

It’s becoming more evident each day how the people of Israel are being deceived by their government in a political direction which is a self-defeating one.

Until the liberation forces of both Arab and Jews join together against their common enemies – Imperialism and Zionism – there will be no secure future for the people of Israel.

From Cuba we perceive the great possibilities that await the countries whose people become united in a common destiny and who liberate themselves from exploitation.

We wish to receive your magazine to expose and propegate our common cause to which we are ready to contribute in any way.

Israel must announce that under no circumstances is she going to withdraw from Sinai, which according to members of the army is highly vital for the security of the State, far more vital than the Golan Heights and the West Bank.

We have to tell the world that by holding Sinai we neutralize the Middle East’s powder keg, since this frees Israel from the need to do what she did in June 1967, i.e., to start a war as a reaction to war-threats and Egyptian troop concentrations along her borders. The situation on the border of the Suez Canal in recent months proves this.

It would have been better if we had taken such a position immediately after the June war. Now, after the four powers talks have begun, we may have our last chance and we must not miss it. It must be hoped that a clearly stated and properly explained position on this subject will influence the US.

In the Israeli Arab village of Tur’an, two young  Arabs were caught and accused of burning the Israeli flag. A court punished them. In Benei-Brak there are young people who also burnt Israel’s flag on Independence Day and did other things that show their hatred for the State (e.g., they did not close their shops on the day of late PM Levi Eshkol’s funeral etc.). What punishment did they get?

What opinion can an Arab citizen have of the government if it has different laws for citizens of the same state?

Let the Israeli citizens from Tur’an be freed, or let the students of the Jewish religious school – a nest of hatred, for not only that Arab village is a nest of hatred – be brought to trial.

In about 10 years this boy will be serving in the army and if there will be a war he will take part in it.

Many youngsters who have taken part in the six days’ war were still children at the time of the Sinai war.

The retreat after the 1956 Sinai operation gave rise to another war.

Do everything to prevent another war for your child.

Withdrawal from the territories means – another war.

Give us a hand, join us. We may prevent another misfortune.

The movement for preventing another war

[ISRAC 1, next item: News from the Fatherland]