News from the Fatherland

“We demand that the borders be moved further away. Although we thought that the Jordan and the Yarmuk rivers were the natural border between us and the Hashemite Kingdom a year ago, reality now forces us to demand a further expansion”. This was said by Mr. Elisha Soletz, one of the founder members of Kibbutz Maoz-Haim, and the chairman of the Beth-She’an District committee.

Representatives of the Jordan Valley settlements put a similar demand to members of the Foreign Office and Defence Ministry, and the Chief of Staff Northern Division at a meeting in Kvutzat Gesher.

The residents maintain that in this, one of the previously quietest border areas, artillery attacks, which started a year ago, have now become continuous. Mr. Soletz said that although infiltrators are unable to come in and lay mines, the artillery attacks are creating a situation of constant tension.

However, Israeli valley residents do not expect that the steps taken by the army will be sufficient to stop attacks. A member from Kibbutz Ashdot Yaacov said that although their members “are united and tied to the land more than ever, and that work continues in the fields, the government will have to realise that some of the residents are children and elderly people and cannot live under these conditions. The border problem will have to be dealt with more radically.

“If it cannot be done by diplomacy, force should be used to extend our borders so that our settlements will be safe to live in. Cabinet ministers should realise that our situation now is worse than the situation in Upper Galilee was prior to the six days war. The confrontation is not between two armies who know the rules of the game but between frenzied terrorists and farmers. If it is true that the Golan area was pacified by attacking civilians in villages, we say good, by the same criterion deliver us too, pacify Gilad.

An appeal to Israeli students to join New Left organisations in order to combat anti-Israeli tendencies inside them and attract their young Jewish members to immigrate to Israel was made last week by Mr. Abraham Shenkar, member of the directorate of the Jewish Agency.

Mr. Shenkar, who immigrated to Israel about one month ago, had been in charge of the Jewish agency department of Youth and Pioneers in North America. He says that “throughout the world Jewish youth are influenced by general processes and their hostility towards Israel is rational rather than emotional which makes it easier to make them see their error”.

Mr. Shenkar remarked that about 30% of young people in the New Left are Jewish. “We are wrong in taking the New Left to be a rigid anti-Israeli structure”, he said, “It is not a movement whose motto is for something or other, but an attempt at dissociation from certain concepts of the affluent society and a reaction to the failure of both the old Left and Liberalism. When I met the leaders of the New Left they always stressed that they do not constitute a definite organizational structure. In fact, they object to any structure and have no ideological programme. They regard themselves as part of a third world to which Israel, unfortunately, does not belong. They identify Israel with the establishment and draw the conclusion that they have to oppose it. But if Israeli youth, and the bodies in charge of immigration in the U.S.A. find a way of working inside New Left circles, then there is no reason why Jewish youths belonging to these circles should not adopt Zionist values”.

Policemen dragged eight members of the Matzpen group from Sokolov House yesterday when they tried to hold a meeting without the Landlord’s consent.

Two weeks ago, representatives from Matzpen hired a hall in Sokolov House for a public meeting but did not mention the purpose of the meeting. On Monday, Mr. Meir Ben Gur from the management noticed that an advertisement in Haaretz announced the meeting to be “Against the occupation, against Zionism and for a different Israel”. He immediately told the organisers that he would cancel the booking and return their money, as he had not been informed of the purpose of the meeting.

Yesterday evening at 6:30 fifteen youngsters from Matzpen entered the hall and refused to leave it. Policemen were called and tried to convince some of them to leave. Seven or eight youngsters refused and were carried out by four policemen who held them by their arms and legs without hurting them. The others, about 30 people, held the meeting on the steps of the building. 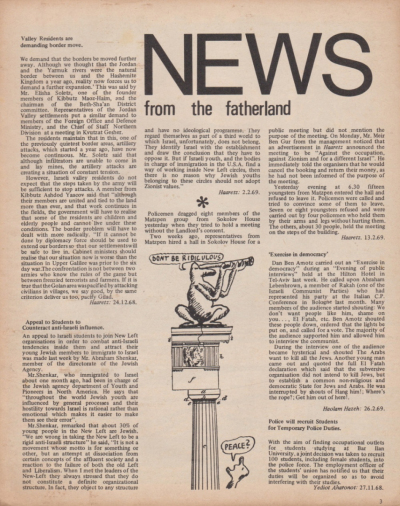 Dan Ben Amotz carried out an “Exercise in democracy” during an “Evening of public interviews” held at the Hilton Hotel in Tel-Aviv last week. He called upon Avraham Levenbraun, a member of Rakah (one of the Israeli Communist Parties) who had represented his party at the Italian C.P. Conference in Bologne last month. Many members of the audience started shouting: “We don’t want people like him, shame on you…, El Fatah”, etc. Ben Amotz shouted these people down, ordered that the lights be put on, and called for a vote. The majority of the audience supported him and allowed him to interview the communist.

During the interview one of the audience became hysterical and shouted “The Arabs want to kill all the Jews”. Another young man came out and quoted the full El Fatah declaration which said that the subversive organisation did not intend to kill Jews, but to establish a common non-religious and democratic State for Jews and Arabs. He was interrupted by shouts of “Hang him!”; “Where’s the rope?”; “Get him out of here!”

With the aim of finding occupational outlets for students studying at Bar Ilan University, a joint decision was taken to recruit 100 students, including female students, into the police force. The employment officer of the students’ union has notified us that their duties will be organized so as to avoid interfering with their studies.

[ISRAC 1, next item: News from the Colonies]