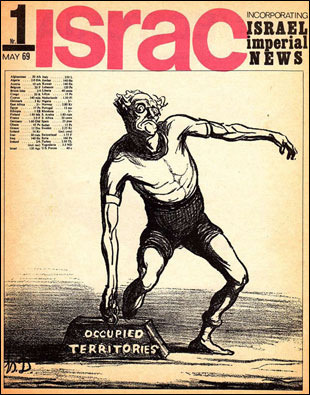 This is the first issue of ISRAC (incorporating Israel Imperial News), the magazine of the Israeli Revolutionary Action Committee (Abroad), set up by Israelis at present staying in various countries.

The occupation of the West Bank and other territories by military force is not only unjust, but is also a political crime against all the people of the Middle-East — Jews and Arabs, Israelis and Palestinians. While pretending to secure Jews from persecution and discrimination, the Zionist establishment in Israel persecutes and discriminates against the Palestinian Arabs, denying them civil as well as political rights.

The surrender of the majority of Israelis – some of them declaring themselves “liberal” and “socialist” – to Zionist racial ideology, backed by military supremacy, makes them no less victims than the Palestinian Arab people.

The historically complex conflict in the Middle East is not a clash between Jews and Arabs as such, as the nationalists claim, but a clash between Zionist colonization, which is, and always has been, an ally of imperialism, and the indigenous population of Palestine. Furthermore, the very existence of the ‘Zionist enterprise’ brought it into conflict with the masses of the Arab people throughout the region.

No, I don’t want to negotiate

The Palestinian people, the main and direct victims of Zionism, are at present engaged in a struggle for liberation. This is not only a just struggle for self-determination but also a potential for transforming the whole of the Middle East.

The experience of the Israeli-Palestinian conflict confirms that national problems cannot be solved in a nationalistic way. Like all major social and political issues they can only be resolved in a non-nationalistic way by means of a socialist revolution: leading not towards a bureaucratic or repressive regime, but towards a new society, in which the people, liberated from all social and national oppression, will together create the Revolutionary Federation of the Middle-East.

[In the same issue of ISRAC: Jews & Arabs Demonstrate Against Occupation

[ISRAC 1, next item: Letters to other Editors] 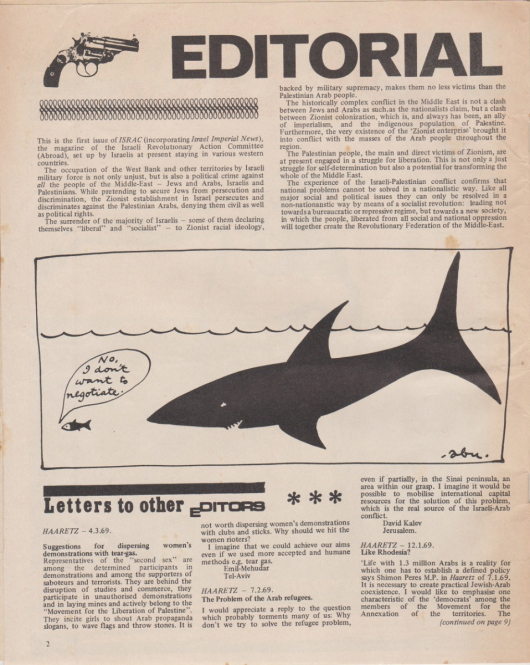