Down with the Occupation 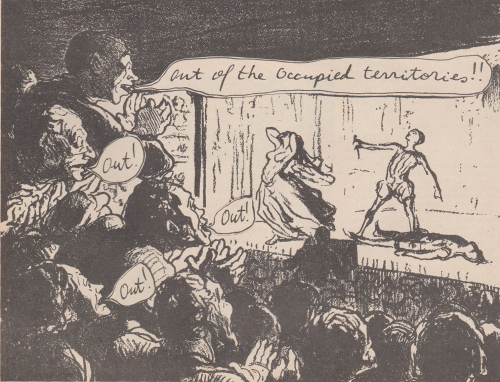 The twenty months that have passed since the 1967 June war have repeatedly given the lie to the claim that an Israeli military victory can bring about peace or a normalization of Israeli-Arab relations.

Since the end of the war – despite Israeli shows of strength like the recent attack on the Beirut airport – official claims have been refuted on every level: on the level of international relations, on the military level and on the internal level At the same time the nationalistic bragging of all spokesmen of the Zionist camp has grown louder and louder. Politicians, army officers, party leaders and journalists are brainwashing the Israeli citizen. They falsify, distort and obscure reality and foster a false feeling of self-importance and power in him. This activity is shared by both so-called “doves” and “hawks”; it engulfs all Zionist and semi-Zionist parties, from Gahal and the religious parties, through the Labor Party and Mapam to the Mikunis-Sneh Party.

The debate taking place inside the Zionist camp itself may create a misleading impression, because it is sometimes loud and bitter and may appear to indicate the existence of different, even conflicting, political lines. But a careful and detailed scrutiny of that debate proves that all the participants adhere to the Zionist principle of “Sacred Rights,” according to which “Jews throughout the world” are the “rightful owners of the whole of Palestine.”

During the last twenty months various political parties and groups have come into existence. Some of them advocate total annexation of the occupied territories and indulge in overt fascist propaganda (e.g., the Movement for Greater Israel); some of them advocate the Government’s policy, as expressed by Foreign Minister Abba Eban (e.g., the Movement for Security and Peace – yes, Annexation – no); and still others advocate a federation on the basis of Israeli occupation (e.g., the Movement for an Israel-Palestine Federation). It should be mentioned that those left-wing circles, the liberal intellectuals who (before the war) joined in the struggle against military rule (of the Arab-inhabited parts of Israel) have since the war been carried away on the wave of chauvinism that has swept the country. Moreover, some prominent persons in those circles are actively defending official policy and have been harnessed by the official propaganda machine, especially abroad.

Against this background, the relative importance of the activities of the ISO (Matzpen) and of the Israeli Communist Party (Rakah) far outweigh their actual public influence. Of all the political parties only these two are conducting – each in its own way – a consistent struggle against the continued occupation of the territories conquered in June ’67.

On the International Level

After the war the Government led the people to believe that American backing of Israel was so certain that all other developments on the international scene were of no importance. According to this view, Israel’s military strength in the Middle East and the strength of American imperialism throughout the world are sufficient to secure the consolidation of the present situation, to perpetuate Israel’s military victory and to force the Arabs to sign an Israeli-American-inspired peace treaty. The possibility that American imperialism – the gendarme of the world – might clash with the interests of official Israel because of its own plans and interests – that possibility was ignored. The popular formula was “Let sleeping dogs lie and there will be no American pressure on Israel.”

Meanwhile, it has become clear that the Israeli-American entente forged in 1967 classifies Israel as one of those states that is inseparably tied to the fate of American imperialism – in much the same way as is South Vietnam. Israeli policy faces world-wide denunciation, which is becoming increasingly sharp not only from governments but also from public opinion as a whole, including the youth. The disdain with which Israel’s leaders are meeting this criticism sometimes seems to border on megalomania – particularly when one recalls the size and objective data of Israel.

The historic conflict between the Arab world, the Zionist movement, and state of Israel in its present form will not be diminished even if a Soviet-American settlement on the Middle East is reached in the foreseeable future. Such a settlement, which will be described by the Soviets as a further achievement of the policy of peaceful coexistence, will nevertheless be incapable of solving the Israeli-Arab conflict and will not be in the interest of the peoples of the region.

On the Military Level

Shortly after the end of hostilities in June ’67, the Israeli Minister of Defense Moshe Dayan announced that he was waiting for a telephone call from the Arabs who would ask for an Israeli-Arab settlement within forty-eight hours. That call never came through. It is now remembered in Israel only as a grim joke. At the same time Israeli strategists repeatedly stressed that the new borders (in their own terms, “the presence of the Israeli Defense Forces along the new lines, from the shoulder of Mount Hermon, along the Jordan River and on the banks of the Suez Canal up to the Straits of Solomon”) would provide security. But security is far, far away. Hundreds of killed and thousands of wounded have since been sacrificed by Israel on the altar of that false security.

In the meantime, the activity of the Palestine armed organizations has increased. The official forecasts repeatedly pronounced at the beginning of last year [1968], claiming that demoralization, desertion and inferior human material would soon finish off those organizations, have been proved false. Anyone who has studied the experience of other countries and other peoples cannot be surprised. Only a fool could believe that those organizations would remain static and would not recruit new members, increase their influence and improve their combat power.

Another official theory that has been disproved is that the Israeli occupation is super-liberal and that the Palestine masses are resigned to it. (By the way, with what other occupation do those who claim the Israeli one to be liberal compare it?) It is enough to recall the strikes and demonstrations in all the towns of the occupied territories.

Under these conditions of armed resistance, of strikes and demonstrations, Israeli acts of repression have become daily occurrences. Administrative detentions, collective punishments such as curfews, mass searches and restriction of the freedom of movement – all these have become commonplace under the occupation regime whose “liberalism” is symbolized by the atrocious system of punitive demolition of houses. Another method that is continually used is the deportation of political leaders, public figures and ordinary men and women against whom no charge can be made except that they have taken part in political activity. It must be noted that deportations to Jordan are consistently used against those elements that in the past were victims of the Jordanian secret police-including socialists and communists of various trends. The underground leaflets published in the occupied territories are full of detailed descriptions (including names, addresses and dates) of cases of victimization and torture which are not disclosed to the Israeli public or even hinted at in the Israeli press.

On the Internal Level

The Zionist character of the state of Israel has become manifest Zionism, which had been described as “dead” before the war, even by some ardent Zionists, and has now been revived. Zionist ideology can no longer be described simply as an irrelevant anachronism. It furnishes a basis for discussion about the annexation of the occupied territories, of their colonization by Jews, of the “threat which the existence of an Arab population poses to the Jewish character of Israel” (the demographic problem), etc.

Against this background, a fascist-chauvinist mood is growing in Israel, following classic patterns which are not necessarily characteristic of any particular nation. Expressions like “the supremacy of the nation,” “the sanctity of our historic values,” “the cradle of our ancient culture,” “the eternity of war and the sanctity of blood,” etc. have gained wide currency. They are emphasized in print and in speeches, on radio and television, in the press and in schools, in the Army and in youth movements. There is also a growing clamor for “strong leadership” and a “strong leader” as well as for preserving “national unity.”

At the same time there is an increase in administrative and police repression against Israel’s Arab citizens. Hundreds and thousands of Israeli Arabs are subject to restriction of freedom of movement, house arrest, detention without trial, searches and harassment and are denied the legal right to organize themselves. Since the war, anti-Arab incitement has reached peaks hitherto unknown in Israel; and in Jerusalem, Jaffa and Tel Aviv there were even mass anti-Arab outbreaks.

In Israel, as well as in the occupied territories, British colonial laws are widely applied. These are the notorious Emergency Defense Regulations (1943) which, when promulgated by the British Mandate authorities, were strongly denounced by the leaders of the Jewish community (in particular, the present Minister of Justice), who compared them to Nazi laws.

We hold that the solution of the main problems of the Middle East, including the Israeli-Arab problem, requires a fundamental transformation of the regimes in all the countries of the region – i.e., a socialist revolution. As for Israel, the socialist revolution will transform it completely from a Zionist state, a tool for furthering Zionist colonization, a natural ally of imperialism into a state expressing the real interests of both Jewish and Arab masses, a state which can and will be integrated in a socialist union of the Middle East.

But in the present circumstances it is impossible even to imagine working for that goal without a consistent struggle against a continued Israeli occupation of the Arab territories. Only through this struggle can the Jewish and Arab masses be mobilized for socialism.

We appeal to the masses of Israeli workers to combat the growing phenomenon of chauvinism and to struggle against the fascist tendencies which are spreading in the Jewish public.

This is in the interest of the Israeli workers, who are made to pay the price of continued occupation and war.

Demonstrations, meetings, pickets, petitions, letters to the press – all these means should be used to struggle for withdrawal from the occupied territories.

The Israeli Socialist Organization (Matzpen)
[ISRAC(A) 1, next item: From the Diary of an Israeli Arab by Fauzi El-Asmar]
FacebookTwitterWhatsAppTumblrPinterestEmail