[Published in The Independent on Sunday, 6 January 1991]

Victor Ostrovsky is a former Israeli agent whose sensational memoirs — By Way of Deception: The Making and Un-making of a Mossad Officer — leave George Blake’s looking very dull indeed. Since the book was published, last September, it has sold half a million copies in the United States alone, helped on its way by the Israeli government’s unsuccessful attempt in the American courts to obtain an injunction blocking publication. It has already been translated into 23 languages.

Amid all this global hype, James Rusbridger’s review of the book last month in a Cornish newspaper, the Western Morning News, may not be particularly notable. But Rusbridger’s fierce condemnation of Mossad’s “excesses” annoyed at least one reader: just before Christmas, the Western Morning News printed a letter from one Anthony Compass of Eaton Terrace, London, complaining of the reviewer’s “bizarre opinions”.

The letter was pretty bizarre itself. For one thing, the Western Morning News does not circulate widely in London. More suspiciously, there is no one called Anthony Compass on the electoral roll for either of London’s Eaton Terraces, in E3 or SW1. Nor is this elusive character on the telephone, even ex-directory.

Victor Ostrovsky now lives at a secret address in Canada, ever fearful of a Vanunu-style kidnap by his former comrades in Israeli intelligence. When I told him about the Compass letter last week, he burst out laughing. “There is some humour in it”, he Said. “It’s like an inside joke, you know?” In the early 1970s, he explained, there was a left-wing group in Israel called Matspen, which was obliterated by the security forces. The name Matspen was then taken over by Mossad’s disinformation department as a nom de plume when planting bogus letters or articles. “It means that everybody who has to know will know it’s by one of us”, Ostrovsky told me.

What, you may be wondering, does this have to do with our man in Eaton Terrace? Perhaps I should translate: Matspen is the Hebrew word for compass. 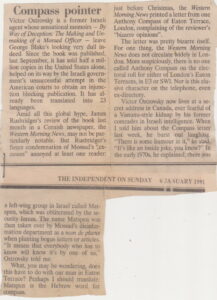