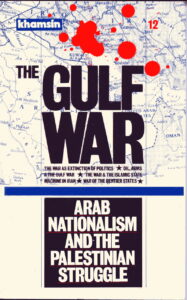 The Iran-Iraq war is the bloodiest and most brutal of all armed conflicts between minor powers since the second world war. But very little has been written about it by way of analysis, particularly on the left. Perhaps this is because this war also seems to be the most senseless in living memory.

A welcome initiative was taken by the Committee for the Defence of the Democratic Rights of the Iranian People (CDDRIP), who organized a day-long symposium on the war. We are grateful to the CDDRIP for allowing us to publish the proceedings of this symposium, held in New York on 8 September 1984, and we apologize to them, as well as to our readers, for the delay in publication.

The participants, most of them from the warring countries, assess various aspects of the war, its wider significance, and the lessons to be drawn from it. In a keynote talk, Muhammad Ja’far stresses the unique nature of this brutal and senseless war and of the sanguinary regimes locked in combat. Joe Stork examines the war from the viewpoint of its main material aspects – oil and arms. M. Arman mounts a critique of the Iranian leftist intellectuals whose old dogmas have been shattered by the war. Ali Ashtiani outlines the connections between the external armed conflict and the internal tensions within Iran’s Islamic state machine. R. Keivan’s talk concentrates on the wider international aspects of the war. Finally, Eqbal Ahmad returns to the keynote theme, and attempts to draw a few conclusions from the discussion.

Khamsin has refrained from imposing any kind of political or other selection on the material of the symposium. Except for minor stylistic emendations, the talks are printed here either as recorded during the symposium or, in some cases, as subsequently re-written by the authors. Ali Ashtiani’s contribution was translated from Persian by Shireen.

Another major part of this issue is devoted to a wideranging essay by ‘Adel Samara, an independent Palestinian Marxist and graduate student at Birkbeck College (London University), who has recently joined our Editorial Group. In this essay he examines the historical failure of bourgeois Arab nationalism, resulting in defeat – the case of Palestine is examined in some detail – as well as in economic and political fragmentation. He then goes on to outline how the uneven and divergent development of the Arab countries could create the conditions for its own supersession, and draws a possible scenario for a future economic convergence, which may lead to unification of the Arab homeland.