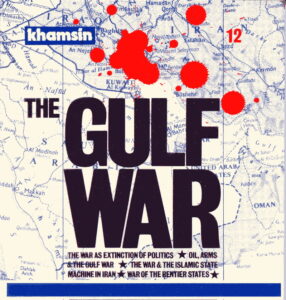 The Committee for the Defence of the Democratic Rights of the Iranian People (CDDRIP) is pleased to have organized this first in-depth symposium on the Iran-Iraq war [held in New York, 8 September 1984]. It is a matter of the greatest regret that the various organizations opposed to the Khomeini regime have not considered this war beyond the level of rhetoric in their various publications. In the academic field, there have been a few books on the war, but as one of our participants noted, these have been more in the nature of historical and scholastic studies of treaties and geopolitical considerations; they have not dealt with the real roots and political nature of the elements that brought about the war and make its continuation possible.

It should be noted that our participants are from different backgrounds and of different nationalities: American, Pakistani, Iranian and Iraqi. This variety gives a special character and depth to the symposium. It is interesting to note also how all converged, from their different perspectives, in commenting on the wastage of human life and societal wealth that characterizes this war. Two countries are being ruined, and their destruction is being helped along by the superpowers and the indifference of other nations. This is an unprecedented war in the history of both Iran and Iraq, the region and and in some ways the world.

The symposium was organized in two parts. The first attempted an in-depth analysis of various aspects of the war; the second, conducted in Persian, brought together in a panel format several different political points of view on the nature of the war. The presentation of each of the main speakers and the introductory remarks of each panel discussant have been transcribed, but unfortunately not the ensuing lively discussion with the floor. We end by expressing our appreciation to Dr Richard Falk of Princeton University for kindly providing the reader with some introductory remarks on the proceedings.

The War and the Islamic State Apparatus in Iran – Ali Ashtiani

The Committee for the Defence of the Democratic Rights of the Iranian People (CDDRIP) was set up in New York in 1982, along with sister committees in Washington and Los Angeles. Through its activities it aims to expose the undemocratic nature of the Khomeini regime in Iran. It also provides a unifying forum for individuals and other opposition groups. It believes in activities that bring people of different beliefs and ideas to share the same democratic goals.

CDDRIP organizes conferences, seminars and publications devoted to exposing the tyrannical nature of the Islamic Republic of Iran. It also promotes artistic groups and artistic expression for progressive purposes. The proceeds of these occasions have been donated to Kurdish freedom fighters in Iran.

CDDRIP is independent of all political groups whether inside or outside Iran.

CDDRIP supports the true anti-imperialist and anti-reactionary movements in Iran. It supports all activities in defence of the democratic and human rights of the Iranian people. It defends the social and economic rights of women and deprived children.

CDDRIP supports the social, economic, cultural and political rights of the various Iranian ethnic groups and peoples. It supports the freedom of religious conscience and the separation of religion and government.