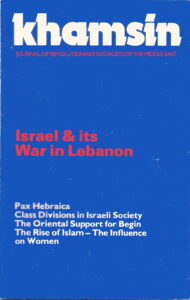 The present issue of Khamsin goes to the press almost exactly one year after Israel’s invasion of Lebanon. The events of the war – the invasion, the siege of Beirut, the massacre of Sabra and Chatila – have received wide coverage in the press and in a number of books. The central theme of the present issue is not a description of these events themselves, but their broader context.

In his article Pax Hebraica, E. Farjoun shows that the Israeli intervention in Lebanon was but a first step towards implementing a far-reaching plan. This plan – openly discussed in Israel, where it is referred to as the ‘Big Thing’ – aims to re-draw the map of the Arab East and place it under the hegemony of a new imperial Israel. Part of this plan, associated particularly with the name of Ariel Sharon, is to ‘solve’ the Palestinian problem by establishing a puppet state on the East Bank of Jordan, and compelling hundreds of thousands of Palestinians presently living in Lebanon and the West Bank to move into that state.

Only against this larger background can Israel’s genocidal conduct of the war be properly understood. Farjoun’s article, written just before the Sabra-Chatila massacre, also helps to explain how that massacre fits in with broader Israeli designs. This analysis lends added credence to the growing body of evidence that when Sharon and his generals invited the Phalange into Sabra and Chatila, they were fully aware of the probable consequences. (The Kahan Commission dismissed this possibility, without giving it proper consideration).

Recent events in Lebanon did not happen in a vacuum; the Lebanese body politic was in an advanced state of disintegration long before the Israeli invasion. As the civil war dragged on, any initial political distinction between right and left tended to get drowned in the blood of sectarian killings. Magida Salman’s article describes the political psychology of the warring sects, their continuing feuds and their new illusions.

In this section we also print a letter from a reader in the West Bank, ‘Adil Samara, who comments from an independent leftist viewpoint on the war and the dilemma which its consequences has posed to the PLO.

Future developments in the Middle East will depend crucially on the internal political evolution of Israel. In this connection it is important to understand the nature of the support which the Begin government has won among Israel’s O riental Jewish working class. E. Farjoun’s article Class divisions in Israeli society as well as A. Ehrlich’s critique of that article constitute a debate on this important topic. Although the two writers differ on several points, they are at one in rejecting the widespread view that the mass support for Begin is motivated purely, or even predominantly, by ideology. Rather, this support has important material causes, which must be sought in the specific socio-economic structure of Israeli society.

The first section of the present issue ends with an eye-witness report on the everyday realities in the Israeli-occupied Gaza Strip.

Apart from articles on Israel and its war in Lebanon, this issue contains an article by Azar Tabari, in which she subjects to critical examination the widespread view that the rise of Islam improved the lot of women compared to their situation in pre-Islamic Arabia.

The Discussion Forum in this issue contains two contributions by our readers. Clive Bradley’s contribution criticises certain aspects of P. Clawson’s analysis of the development of capitalism in Egypt (Khamsin 9). Roberto Sussman’s reply to I. Shahak’s essay on the Jewish religion (Khamsin 8 and 9) criticises Shahak’s ‘moralistic’ attitude and disputes his view of Jewish history in the Middle Ages. Shahak’s controversial essay has attracted much comment, and the debate around it will no doubt continue.