News from the Fatherland

Jerusalem is embarrassed by the release to the US press of a letter from Mrs. Golda Meir, the Israeli Prime Minister, to President Nixon congratulating him on his statement of Vietnam policy on November 3 (1969) and expressing the view that the speech “contains much that encourages and strengthens freedom-loving small nations the world over”.

The hope here, apparently, was that the letter would remain secret, and that Mrs. Meir would achieve the aim of pleasing Mr. Nixon without antagonizing that section of American public opinion opposed to the Vietnam war, which includes many Jewish and non-Jewish friends of Israel.

Critics of Mrs. Meir’s letter recall Israel’s unconditional and almost lone support for France during the Algerian campaign, support which continued even after warnings that President de Gaulle was preparing a volte face in Algeria.

After embarrassed denials that the letter had ever been sent, the Prime Minister’s Office released the text on Tuesday afternoon.

Reactions range from total disapproval to justification based on opportunistic reasons. The evening newspaper, Maariv, which is usually pro-American, denounced the letter in an editorial comment as being out of place. Haaretz, the independent daily, on the other hand, justified it on the grounds of political and security requests by Israel to the White House, which were now under consideration. 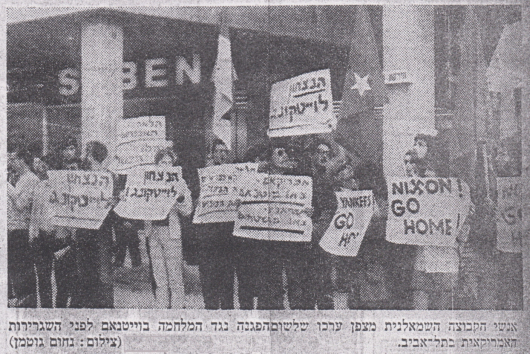 Activists of the leftist group Matzpen held a demonstration against the war in Vietnam in front of the American embassy in Tel Aviv, April 8, 1969 (photo: Nahum Gutman; Haaretz)

A co-ordination committee has been established in Jerusalem. The committee comprises representatives of Matzpen, the Communist party (RAKAH), the New Israeli Left – a new group of ex-members of the right-wing Communist party (MAKI), the Peace League, ex-members of MAPAM (Riftin group) and some others including Uri Davies (Peace for Jerusalem) and two groups of college students. At the first meetings there were also two other groups, one from MAKI and the other from Haolam Hazeh (Uri Avneri), but after the first joint demonstration against Dayan’s new policy of “environmental punishment”, these two groups were forced by their leaders to leave the co-ordination committee. Since its creation the committee organized two demonstrations: on the 25.11.1969 and on the 15.12.1969.

The Israeli-Arab student, Muhamad Sadiq, who had been under administrative custody (without a trial) since the summer of 1967, was released from prison after he received an entry visa to the United States and he then left the country – this has been reported by the Arab Student Committee in the Hebrew University. The Arab Student Committee published a protest leaflet about this, describing it as “virtual expulsion” of the student. The committee asked the authorities to put on trial the student Darwish Qashu’a, who is in administrative custody, or to release him. The committee sees in the “expulsion” of Sadiq and the arrest of Qashu’a an “attempt to hit at the Arab population”. It calls on the students in the university to support “democratic action” against the administrative imprisonment.

Last summer, Habib Kahugi and his wife, Naifa Aaqla (from Haifa) left the country. They had been arrested as suspects for having contacts with the Syrian intelligence, but never put on trial. They were kept in prison until they agreed to leave the country. They got a visa for the United States and sailed. 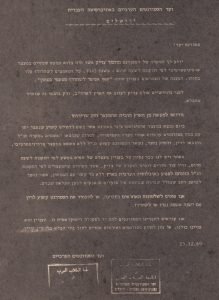 The leaflet protesting the expulsion of the student Muhamad Sadiq and the arrest of Darwish Qashu’a, published by the committee of Arab Students in the Hebrew University. 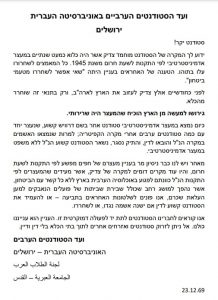 The impresario Giora Godik sent a circular to the press in which he said that he would not produce the musical “Hair” in Israel in Hebrew because the Israeli public would not understand how it was possible to piss on the American flag in a play. 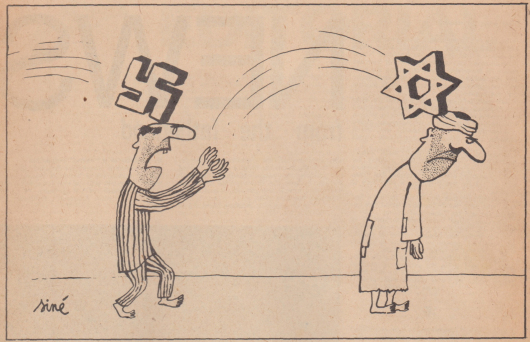 By-products of a “liberal” occupation

The Israeli government declared, officially, that representatives of “Amnesty International” will no longer be allowed into Israel to investigate allegations of ill-treatment of Arab prisoners.

A joint meeting of the foreign press correspondents in Israel (many of them pro-Zionist Jews) which took place in Jerusalem on December 10, 1969, demanded the abolition of the military censorship. It transpired that the censor intervenes quite arbitrarily and infuriates even these sympathisers of the Israel government.

Teenage high-school pupils in Tel Aviv, who published a high-school magazine named Ga’ashush, were attacked by policemen for distributing it publicly in Tel Aviv and arrested. Charges of disorderly conduct and incitement were brought against them. Each of these incidents is a first of its kind in Israel, they thus set precedents for a very definite policy. Hitherto it was only the Arab population under Israeli rule which suffered from such measures, but it seems that as a result of the “liberation” of “Greater Israel”, the occupiers’ mentality is already beginning to poison Israeli society itself. 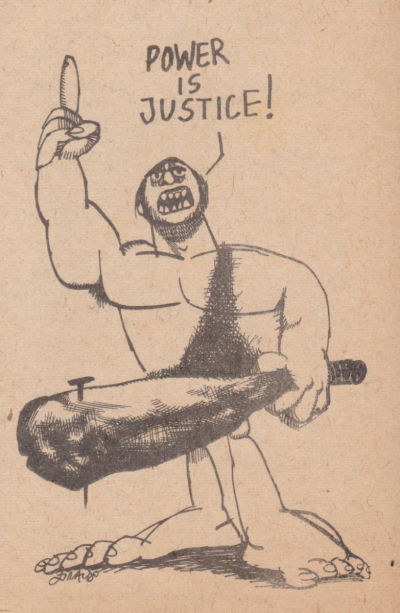 The following is a translation of a statement issued by the Israeli Socialist Organization, datelined January, 1970. Notes in square brackets were inserted by the translator:

In the middle of November, the editorial board of Matzpen, the organ of the Israeli Socialist Organization, submitted to the censorship all the material which was about to be published in the next issue (number 51). This is required by the laws which are in force in Israel.

About two weeks later – after long deliberations – the material was returned to the editorial board. Most of it was banned – not allowed to be published. The reasons given by the Chief Censor for Press and Radio (this is his official title) were expressed in one sentence: “Because the publication of this material may harm the security of the State, and the security and welfare of the public.” This is an accurate quotation from the censor’s letter.

The 12 banned items (out of 16 articles and reports submitted for censorship) included:

The Israeli censor, whose job (according to the official version) is to prevent leakage of military secrets through the press and radio, has in fact taken a step which is entirely political and which is designed to liquidate Matzpen. Using the powers given to him by the 1945 Emergency Regulations, he tried to kill Matzpen without issuing a death certificate. By “death certificate” we mean an order which the Minister of the Interior can issue, instructing a legal periodical to be closed down. In the present political circumstances, such an order would certainly have repercussions abroad which (so the authorities fear) would damage Israel’s “democratic image”, especially in left-wing and democratic circles. The authorities therefore chose to use the pretext of “State security”, in order to liquidate a socialist paper without actually declaring it illegal.

As mentioned above, the powers of the censorship derive from the 1945 Emergency Regulations. This is an extensive system of colonial regulations which the Government of Israel inherited literally and without change from the British High Commissioner who ruled this country [under the British Mandate]. On the basis of these regulations the authorities last August refused to grant the ISO a permit to publish a paper in Arabic, a twin brother of the Hebrew-language Matzpen. And when the ISO tried to publish a single issue (which does not require a permit) in Arabic, the censorship banned about 80 per cent of the material, including translations of articles that had previously been published in Hebrew in Matzpen.

Indeed, the censorship is omnipotent! A political article which receives its imprimatur and appears in Hebrew becomes a “military secret” and is banned by it in Arabic translation.

We condemn this political censorship, as we have always condemned the colonialist Regulations on which it is based. And in order to emphasize the arbitrariness of the Israeli censorship we hereby report a further development in its treatment of Matzpen.

In the beginning of December 1969, when the total ban described above was made known to many journalists in Israel (including foreign correspondents), the authorities were put in an embarrassing position. “Inconvenient” questions were asked about the reasons for the ban. A news item on this was published in the Paris Le Monde; a similar item which was about to be published in Haaretz was banned by the censorship.

Representatives of the editorial board met the chief censor and demanded to know the reasons for the ban. He hid behind the notorious Emergency Regulations, but promised to re-examine the material. He said he would give his reply in two days’ time.

Well, after two days all the “security reasons” underwent a total change. The article on Ho Chi-Minh could in the beginning of December “harm the security of the State”; but in the middle of December it got the imprimatur. The interview with the director of the Discount Bank was in the beginning of the month liable to “harm the security of the public”; but in the middle of the month it was cleared for publication. The informative report on the occupied territories was “dangerous to the welfare of the public”; a fortnight later the danger was over. There are many similar examples; the editorial board of Matzpen possesses plenty of them.

But this is not the end of the story. The Israeli censorship did not change its political character; it only retreated. Three articles which are of great importance and interest to the Israeli reader remained totally or partly banned: the account of Israeli’s activities on in Africa, the interview with Hawatmeh and an article containing political polemics against Mapam.

This third article, which polemicizes against Mapam [a “left” Zionist party] was written by two of our comrades and is entitled “Against the Zionist left”. We enclose it here in full, including the parts banned by the censorship. The latter are highlighted. [A translation of this article appears in this issue of ISRAC]. Read it carefully and consider:

What are the authorities afraid of? Why do they ban the underlined passage which contains our principled position? Why do the authorities prefer to leave us exposed to libels and slanders which identify us with Al-Fateh, and use the censorship to prevent us from presenting our own position?

We have a clear answer: the nationalists of both sides are happy to confront and argue against one another. But they are afraid of confronting internationalist views which expose their nakedness. We shall not flinch.

The Israeli Socialist Organization, uniting in its ranks Jewish and Arab internationalists, will continue its struggle. 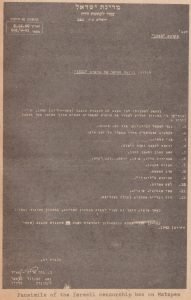