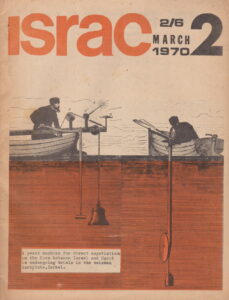 A peace machine for direct negotiation on the Suez between Israel and Egypt is undergoing trials in the Weizman Institute, Israel.

In an article published in Black Dwarf (June 14, 1969), signed by our comrades A. Said [Jabra Nicola] and Moshe Machover, the authors adopt a critical attitude towards the idea of a Palestinian State (“If one is thinking of a bi-national state, this will be an artificial creation, separating the Palestinian Arabs from the rest of the Arab world and from the revolutionary process taking place in it”), yet in ISRAC No. 1 of May, 1969, an article signed by our comrades Machover and Eli Lobel puts forward a Judeo-Arab solution within a common country (“The creation of a Democratic Palestine, without ethnic or religious discrimination, whatever ethnic element is in the majority, is the only solution giving free expression to the rights of both people”).

This apparent inconsistency results from our constant daily need to combat two types of illusion. One is that a solution to the Palestinian problem can be found independently, and in isolation, from the revolutionary and anti-imperialist struggle of the whole region. At the same time we must fight its opposite, i.e. the belief that Socialism in the Middle East will automatically solve all its problems, insofar as such belief implies that the struggle should be adjourned until there can be a concerted effort throughout the whole region. Neither of these attitudes takes into account the Middle East realities and the dynamics of the struggle.

At the present moment, the analysis must be deepened, points of principle must be affirmed, and the general perspectives of the revolutionary struggle in the Middle East must be traced, rather than a detailed solution put forward. The exact form of the solution can only be determined by the struggle itself. This implies that our whole effort must be directed towards the emergence of a joint revolutionary force. This force, while fighting against all forms of national oppression, should at the same time transcend the national level and become a revolutionary factor in the whole region. Such a development is particularly necessary insofar as it corresponds to the conditions of the Middle East, where imperialist forces permanently intervene to maintain their domination, and where, in consequence, the achievement of the national and social liberties of the peoples living there cannot be realized in isolation from each other.

It is with the reality of the whole of the Middle East in mind that we put forward our analysis, perspectives, and principles as follows.