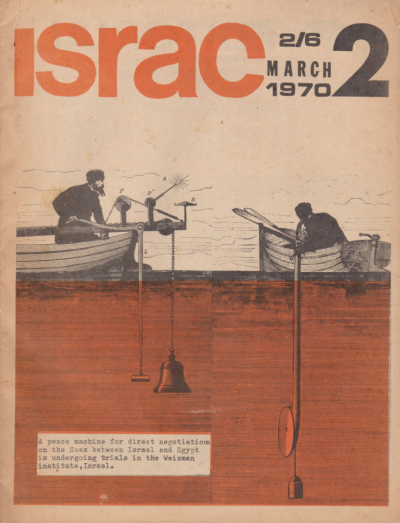 ISRAC Front Page caption: A peace machine for direct negotiations on
the Suez canal between Israel and Egypt is undergoing trials in the Weizman institute, Israel.

The following is a translation of a statement issued by the Israeli Socialist Organization [ISO], datelined January, 1970. Notes in square brackets were inserted by the translator:

In the middle of November [1969], the editorial board of Matzpen, the organ of the Israeli Socialist Organization, submitted to the [military] censorship all the material which was about to be published in the next issue (number 51). This is required by the laws which are in force in Israel. About two weeks later — after long deliberations — the material was returned to the editorial board. Most of it was banned — not allowed to be published.

The reasons given by the Chief Censor for Press and Radio (this is his official title) were expressed in one sentence:

This is an accurate quotation from the censor’s letter. The 12 banned items (out of 16 articles and reports submitted for censorship) included:

The Israeli censor, whose job (according to the official version) is to prevent leakage of military secrets through the press and radio, has in fact taken a step which is entirely political and which is designed to liquidate Matzpen. Using the powers given to him by the 1945 Emergency Regulations, he tried to kill Matzpen without issuing a death certificate. By “death certificate” we mean an order which the Minister of the Interior can issue, instructing a legal periodical to be closed down.

In the present political circumstances, such an order would certainly have repercussions abroad which (so the authorities fear) would damage Israel’s “democratic image”, especially in left-wing and democratic circles. The authorities therefore chose to use the pretext of “State security”, in order to liquidate a socialist paper without actually declaring it illegal.

As mentioned above, the powers of the censorship derive from the 1945 Emergency Regulations. This is an extensive system of colonial regulations which the Government of Israel inherited — literally and without change — from the British High Commissioner who ruled this country [under the British Mandate]. On the basis of these regulations the authorities last August refused to grant the ISO a permit to publish a paper in Arabic, a twin brother of the Hebrew-language Matzpen. And when the ISO tried to publish a single issue (which does not require a permit) in Arabic, the censorship banned about 80 per cent of the material, including translations of articles that had previously been published in Hebrew in Matzpen.

Indeed, the censorship is omnipotent! A political article which receives its imprimatur and appears in Hebrew becomes a “military secret” and is banned by it in Arabic translation…

We condemn this political censorship, as we have always condemned the colonialist Regulations on which it is based. And in order to emphasize the arbitrariness of the Israeli censorship we hereby report a further development in its treatment of Matzpen.

In the beginning of December, when the total ban described above was made known to many journalists in Israel (including foreign correspondents), the authorities were put in an embarrassing position. “Inconvenient” questions were asked about the reasons for the ban. A news item on this was published in the Paris Le Monde; a similar item which was about to be published in Haaretz was… banned by the censorship. Representatives of the editorial board met the chief censor and demanded to know the reasons for the ban. He hid behind the notorious Emergency Regulations, but promised to re-examine the material. He said he would give his reply in two days’ time.

Well, after two days all the “security reasons” underwent a total change. The article on Ho Chi-Minh could in the beginning of December “harm the security of the State”; but in the middle of December it got the imprimatur. The interview with the director of the Discount Bank was in the beginning of the month liable to “harm the security of the public”; but in the middle of the month it was cleared for publication. The informative report on the occupied territories was “dangerous to the welfare of the public”; a fortnight later the danger was over.

There are many similar examples; the editorial board of Matzpen possesses plenty of them. But this is not the end of the story. The Israeli censorship did not change its political character; it only retreated. Three articles which are of great importance and interest to the Israeli reader remained totally or partly banned: the account on Israeli’s activities in Africa, the interview with Hawatmeh and an article containing political polemics against Mapam. This third article, “Against the Zionist left”, which polemicizes against Mapam [a “left” Zionist party] was written by two of our comrades. We enclose it here in full, including the parts banned by the censorship. [A slightly edited version of the article was later published in the book “The Other Israel” and is available on-line. This is the part banned by the censorship:] Read it carefully:

Let us repeat our position. We distinguish between the resistance of the Palestinian Arabs as a whole against occupation, and the specific policy of this or that organization within the resistance movement. As for the popular resistance as a whole, we recognize the right and duty of every conquered and oppressed people to resist occupation and to struggle for its freedom.

As for our position concerning this or that organization within the resistance movement — it is determined primarily according to its political programme. In this we differ from those who reject these organizations because of the very fact that they are struggling against the occupation, or because of the means that they use in the struggle.

We reject the positions of both Al-Fateh, under the leadership of Yasser Arafat, and the Popular Front, led by George Habash. But we make it quite clear that our rejection of their positions does not derive from the fact that they are struggling against Israeli occupation. In our opinion, resistance to occupation is natural and legitimate, and no “loyalty to a national collective” will ever budge us from this principle. As for the means used in the struggle — even when we do not approve of them, they do not constitute the main criterion by which we determine our position.

What are the authorities afraid of?

Why do they ban the underlined passage which contains our principled position?

Why do the authorities prefer to leave us exposed to libels and slanders which identify us with Al-Fateh, and use the censorship to prevent us from presenting our own position?

We have a clear answer: the nationalists of both sides are happy to confront and argue against one another. But they are afraid of confronting internationalist views which expose their nakedness.

We shall not flinch.

The Israeli Socialist Organization, uniting in its ranks Jewish and Arab internationalists, will continue its struggle. 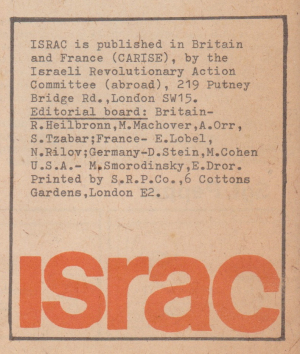