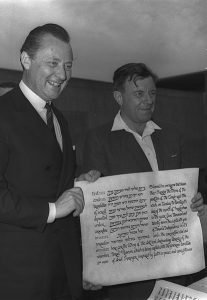 The Jerusalem Post (The English language daily, organ of the Israeli establishment) of 31st March, Weekly Overseas Edition, carries an item about the recent visit to Israel of the notorious reactionary German press tycoon, Herr Axel Springer. The following are extras from that article:

Speaking at the dedication ceremony of the Israel’s Museum of Art and Archaeology, Library and Auditorium, built with a $ 1 million gift from him, Mr. Springer declared: “I believe that today, almost 25 years after the horror ended, it is more important at times to mention the liabilities and the history of our nation than it was then”.

The ceremony took place in a slightly charged atmosphere generated by a rather bedraggled demonstration of 22 young persons, including seven German students, who bore banners saying: “We denounce the reactionary alliance between Axel Springer and his Israeli friends”. Asked to define what they meant by “reactionary” the demonstrators, who included members of Matzpen, Israel’s Guevaraist group, declined to elaborate.

“In a world beset by the spectre of growing disregard for justice and the rights of individual and small nations he has helped to strengthen, by public advocacy, and personal resources, the development of Israel and Jerusalem”.

Mr. Kollek read a cable he had just received from Mr. David Hacohen,  M.K. and Chairman of the Knesset Foreign Affairs and Security Committee, who headed an official Knesset delegation then visiting the Federal Republic. The cable said: “Speaking from the top of the springer building in divided Berlin we greet you in united Jerusalem and express our great hopes for a free, peaceful and united Berlin.”

[Next report in the ISRACA bulletin: Maki as Informers for the Tel Aviv Police]