A Jewish-Arab Demonstration against the Occupation 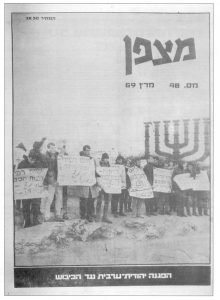 On 28th January a demonstration was held in front of the Israeli Parliament building to protest against the murder of demonstrators in the occupied town of Rafah and to express opposition to the continued occupation. Members of several political organizations as well as non-party individuals took part in the demonstration. The demonstrators presented a letter of protest to the Presidium of Parliament whose contents and very existence were ignored by all parties and all newspapers (except the weekly of Rakah – the Israeli C.P. – which reported the demonstration despite the fact that members of the C.P. did not participate in it). The following is the text of the letter:

Members of the Knesset,

We, citizens of Israel, protest against you and expose your indifference, blindness and heartlessness.

The murder in Rafah exposes the true face of the Parliament, of the Government, and of the Zionist regime in general.

The murder in Rafah refutes the lie which is accepted by all of you about the occupation being liberal. There is no such thing as liberal occupation.

The murder in Rafah is a symptom of the continued degeneration of Israeli policy in the occupied territories. The situation will not improve, on the contrary. But you will continue to hold your tongues.

Faced with your silence we declare: you do not represent us, we have no part with you.

A message from the demonstration against the occupation and against the murder in Rafah was immediately transmitted to the women of East Jerusalem who were holding a sit-in in the Church of the Holy Sepulchre in the Old City. A delegation of the demonstrators went to the Church but were stopped at the gates by a police guard. The delegation transmitted the text of the above quoted letter to the women, together with the following message:

We hereby express our solidarity with the sit-in which is held in the Church of the Holy Sepulchre in Jerusalem, in protest against the very same incident as our demonstration. We regard solidarity and co-operation of this kind as the only way to a common future of the two peoples inhabiting this country. Down with oppression. Down with occupation.

(Translator’s note: Together with this item of news Matzpen publishes photographs of the demonstration in which one can see the text of the following slogans, all of them in both Hebrew and Arabic:

This is a Jewish-Arab demonstration against occupation 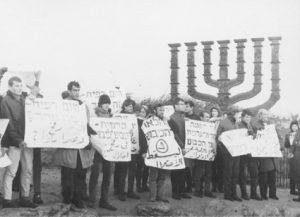 The demonstrators are seen standing in the snow which fell that day in Jerusalem: in the background there is a huge candalabra, the symbol of the State of Israel, which decorates the square opposite Parliament building. Another photograph shows the delegation at the gate of the Church of the Holy Sepulchre.)

[Next report in Israca bulletin: the German-Israeli Reactionary Alliance]