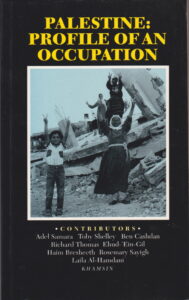 This book goes to print around the time when the Intifada celebrates a year of its momentum. The Intifada – the Palestinian popular uprising in the Occupied Territories of the West Bank and Gaza Strip, has engaged the whole population – women and men, adults and children, rural and urban people, the more well-to-do and the poor, those who have to continue to work in Israel and those who are developing an alternative Palestinian economy in the territories. Israel has responded to the Intifada ineffectively, but with increasingly oppressive measures: random killings, limb breaking, beatings, detentions without trials, round-ups and deportations.

The Israeli-Palestinian conflict, and probably the Middle East as a whole, are at what we consider to be a historical watershed. The Intifada and the Israeli reaction to it have started to transform the situation in the Middle East. A Palestinian state was declared by the Palestine National Council in Algeria in November 1988 in order to consolidate the national achievements of the Intifada, and there has been a growing sense of international urgency about the Palestinian situation. In Israel itself, the internal contradictions between growing fascism on the Right, both secular and religious, including an emphasis on plans for the mass transfer of Palestinians from the Occupied Territories on the one hand, and the growing resistance and dissociation of the Left from the reality of Zionism on the other hand, have started to intensify Israel’s internal crisis of legitimation and national coherence.

The endurance, ingenuity and national unity of the Intifada, and the callousness, open brutality and ineffectiveness of the Israeli reaction have astounded many outside observers. What is important to emphasize is that the Intifada did not break out in a vacuum, but has emerged in the very specific economic, political and cultural historical context of twenty years of occupation. Nor are the modes of organization and behaviour used by both sides during the Intifada new; rather they are an intensification of what has been there all along.

This book, then, is NOT about the Intifada. We shall dedicate the next book in the Khamsin series to its analysis. In this book we present a series of articles which analyse various aspects of the CONTEXT in which the Intifada has developed.

The first article is by ‘Adel Samara, on the political economy of the West Bank 1967-1987. The paper, based on a chapter from Samara’s PhD and book of the same name (published by Khamsin), discusses the general features of the political economy of the West Bank and the ways in which the Israeli occupation has destroyed and transformed it. It has confiscated lands and recruited its workforce as cheap migrant labour in Israel, while tempting into collaboration some parts of the local bourgeoisie. The project is one of economic dislocation with an ultimate political aim: to destroy the Palestinians as a viable national entity.

The next article, by Ben Cashdan, investigates the ways in which the law has been used by the Israeli state to create an ideological legitimation of land expropriation and a demise of Palestinian civil liberties. Cashdan shows how traditional ideologies and ‘security’ arguments justify a legal system which excludes Palestinian interests from the domain of ‘public interests’ and criminalizes their resistance to the occupation.

The following article by Richard Thomas illuminates some of the issues discussed in a more general way in Cashdan’s article. Thomas concentrates on the settler politics in the Old City of Jerusalem. His article shows how government and settler policies collude in the city, as well as some of the constraints, especially the demographic one, within which such policies operate.

Ehud Ein-Gil’s article discusses new programmes for the solution of the Palestinian-Israeli conflict that have recently been proposed by some maverick Zionists. These programmes, based on the principle of federalism, are shown to be heavily weighted against the Palestinians. Nevertheless, Ein-Gil points out that the federalist idea itself can also be used by socialists to propose a form of state in which Israelis and Palestinians, as well as other Arab peoples, can live together on equal terms.

Haim Bresheeth analyses wider and more basic perceptions of the relationship between Israelis and Palestinians. By looking at Zionist Hebrew literature, especially the recent work of left-Zionist authors, he points out the deep roots of Zionist racism and neo-colonial attitudes towards the Palestinians. He examines the central role played by myths in the constitution of the Zionist Self – the ideological backbone of the Israeli state.

The last two articles in this collection relate to the specific roles and organizing of Palestinian women. The first article, by Rosemary Sayigh (published in French in Peuples Mediteraneens, 1988), gives an overview of Palestinian women since 1948 and contextualizes the Intifada. Sayigh reminds us that no full understanding of the Palestinians in the Occupied Territories is possible without examining the general historical and social processes which have influenced the Palestinian people in its entirety, including the Palestinian Diaspora. Of particular importance in this respect are the refugee camps, from which the first impetus of the Palestinian national resistance movement emerged.

The last article, an interview with Laila al-Hamdani, concentrates on the specific role of Palestinian women in the Occupied Territories, describing the Intifada itself and the central role women have been playing in it. Thus it brings us to the stage to which we shall return in our next Khamsin book, to be wholly dedicated to the Intifada.

[This was the last issue of Khamsin. Only four Khamsin Bulletins were published afterwards by the Khamsin collective.]