[The following is a translation of a letter written, on a piece of tissue-paper, in May 1988. It is an appeal by prisoners of the Ansar-3 concentration camp in the Negev. It was smuggled out of the concentration camp and printed in the Israeli Communist Party Arable-language daily, Al-Ittihad. It should be pointed out that the removal of civilian inhabitants of the occupied territories into this and other concentration camps, located inside Israel proper, is a blatant violation of the Fourth 1949 Geneva Convention, to which Israel has subscribed.]

To All People of conscience everywhere, to democratic forces, to all defenders of human rights,

We call on you to rescue us from the camp of slow death, Ansar-3 in the Negev.

We, thousands of Palestinian detainees, have been thrown by the Israeli authorities into Ansar-3 Detention Centre, without regard to the most rudimentary judicial formalities, including our right to know the charges levelled against us. We are kept in difficult circumstances under the burning desert sun, where the temperature by day reaches 45°C and drops to below freezing at night; in an area teaming with reptiles, insects and rats. But the severity of nature is no match for the cruelty of the soldiers of the Detention Centre, with their arbitrariness and constant brutality and violence.

Against us is conducted a war of starvation, thirst and humiliation, and a policy of physical and psychological destruction. They leave no method untried, in order to realize their aims, which violate all international conventions and agreements, not to mention the total violation of all moral and human values.

We are forced to keep our tents open from 5 AM to midnight, exposed to the sun’s searing heat and the desert’s dust and sandstorms. Also, three or four times a day we are forced to sit on the ground for periods of up to half an hour under the scorching sun and the soldiers’ pointed guns. In addition, we are subjected to insults, curses and other humiliations to our personal and national dignity.

Water is in short supply, and cut off for many long ours daily. When there is water, it is hardly sufficient for drinking, toilet needs and twice-monthly showers in this suffocating heat. We have only one change of clothing. We are not allowed to receive clothes and other necessities from our families, nor are we provided with detergents for washing our clothes. Our health is deteriorating and we are suffering from general physical decline and various diseases. Health-care is virtually non-existent.

These conditions are accompanied by the total isolation imposed on us: notwithstanding the length of our detention, the authorities forbid family visits. We are not allowed to send or receive letters, nor are we permitted to have radios, newspapers, magazines, books, writing paper and pencils. Thus we are subjected to punitive and inhumane measures that aim at erasing our human spirit and denying our human and social self-identity. These measures have abolished even those rights granted by the law of administrative detention.

We call on you to stand by us to put a stop to organized violence, terrorism and humiliation, leading us to slow death. They are assassinating justice and the potential for peace, which all human beings long for in this Holy Land.

We urge you to organize delegations of humanitarian groups and organizations to visit this Detention Centre, which lacks everything but the elements of death, terror and murder; and to work towards getting it closed down. We call on you to stand on the side of humanity, to prevent its denial.

May the world hear our voice! 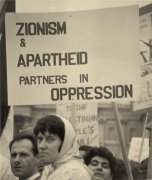