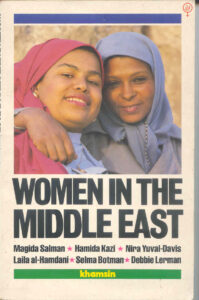 This article is an attempt to analyze, from an individual point of view, the lack of progress, difficulties and failures that have caused many women to discourage and abandon the perspective of a common struggle between Palestinian and Israeli women, in the context of the peace and anti-Zionist movement in Israel.

Countless hours of political action have been invested by women and men searching for correct and acceptable solutions to what is, for all practical purposes, virtually the stagnation of ideals of cooperation and solidarity between the Palestinian and Israeli left. This is not surprising, as the objective differences are so many that both sides sometimes stand beyond mutual comprehension, and thus make little progress in their attempts to reach mutually acceptable positions.

The main and most explosive difference is that of national identity, and the antagonism that is created when positions are seen or explained away as the result of conflicting national interests that are represented inside the movement.

Another major obstacle to cooperation has always been Zionism, its policies, and the day to day expressions of military occupation. Definitions and understandings of Zionism differ substantially between Palestinians and Israelis. Internationalism or anti-Zionism are not always an equalizer in this area.

A more insidious obstacle, and one which is hardly ever mentioned, is the racist attitudes and prejudices that exist among Israelis. Subtle or blatant expressions of racism on the Left and amongst feminists, colour every interchange between Jews and Arabs, despite the lip-service that is paid to condemnation of racism. Class differences, the result of decades of discriminatory and exploitative Zionist policies, are also a clear delineating factor. They account for patronizing attitudes and guilt on the part of the predominantly middle class, college educated, Ashkenazi Israeli progressives, and resentment on the part of the Palestinians, who are either working-class and peasant high school graduates, or first generation professionals fighting their way into a racist work market.

These schisms become even more pronounced when the analysis is adjusted to take account of the complex social stratification that results from the identification of individual Jewish people and communities as Ashkenazis or Sephardis; from the distinction as between populations that are urban or rural, religious or secular; from the division of people living under occupation pre- and post-1967 and from other divisive factors that are reflected in varying measures in the Palestinian or Israeli Left, and in the feminist movement. The resulting cultural differences that stem from social divisions, education, tradition and accepted patterns of behaviour, are the basis for many of the misunderstandings, especially when the factions attempting to cooperate are women.

Any common venture, becomes very difficult due to the mismatch between the respective starting points of Palestinian and Israeli women. A woman’s status in Israeli society is higher than that of her Palestinian counterpart, and so are the possibilities of social and political expression open to her. On the other hand, the majority of Palestinian women still live under the rule of a rigid patriarchy that deliberately hinders and delays their full integration in the social and economic development process that Palestinian society is undergoing. The Palestinian women that have changed their position are those active in the national struggle outside Israel, where concessions have been made by men as the price for women’s contribution.

Zionism has supported and strengthened the traditional role of the family as a tool of conformity and repression. It has also helped women escape from patriarchy by introducing the capitalist mode of production into agrarian Palestinian society. The Israeli economy requires cheap labour for labour-intensive industries and agricultural settlements, and the demand is met by Palestinian women from the occupied territories and from Arab villages inside Israel. In this way they gain a limited measure of economic independence and a better education.

Another practical but very important obstacle to joint enterprises is the language barrier between Israeli women who do not speak Arabic, and the majority of Palestinian women who do not speak Hebrew or who are not willing to conduct a dialogue in the language of the invader. There are practical solutions to this problem, but it becomes a major headache when discussions are held by large numbers of women.

A further practical consideration that often defeats possibilities of joint activity is geographical segregation. Most Israeli activists live in predominantly Jewish towns. Most Palestinian activists live in areas where the population is almost exclusively Palestinian, both in the occupied territories and in villages and cities inside Israel (Acre, Jaffa, Umm al-Fahm). Thus any cooperation involving Palestinian women in the occupied territories meeting and working with Israeli or Palestinian women inside Israel, becomes a very dangerous enterprise that entails the risk of breaking military rules and suffering retaliation that bears no relationship to the political importance of the meetings attended. In general, the organization of any encounter, even if limited only to women living inside Israel, becomes a logistical nightmare.

The above has been a summary of the problems that have to be overcome in order to join forces and find a common ground. These differences between people’s Palestinian and Israeli backgrounds exist, and they explain why the issues and strategies that concern people are also of a different nature. Actually, very few issues carry the same importance for both sides, precisely because of the reasons outlined above. Free abortion, contraception, claim back the night, pornography, careers, are areas of struggle that evoke little response among women that are more interested in mobilizing around ideas like day-care centres, basic education, community centres or job training.

Nevertheless there are also many interests and problems held in common. Women are oppressed by men on both sides of the fence in the name of national needs and priorities; inside the movement, women’s demands are put aside by more pressing issues such as national liberation struggle, organizing for socialist revolution or any activities against repression of civil and human rights. The longstanding national confrontation has validated and hardened male values that become the socially accepted mores.

Palestinian women outside Israel and Israeli women are excluded from the war-games and become supporting characters to men playing roles of machos, warriors, protectors, heroes. The atmosphere of war, violence and intolerance is not an ideal environment in which women can thrive, and the stereotypes perpetuate their status as outsiders to the mainstream. This outlook is aggravated by powerful currents of religious fanaticism and fundamentalism, that have become a real danger to women, in both their political and their social expressions.

In order to survive and protect the small progress made on both sides of the fence, cooperation and solidarity between women is a very important tool. In practice, feminists and socialist feminists that endorse these views have been involved in several attempts to put this into practice. These attempts are channeled into three basic alternative options: joint Israeli-Palestinian groups; feminist organizations; or involvement in the political activism of the peace movement, socialist organizations or anti-Zionist groups.

The best examples of the first kind are groups like Women Against the Invasion of Lebanon, Women Against Occupation, Women’s Committee of the Progressive List for Peace, etc. In these groups, Israeli and Palestinian women found a common ground on which a joint enterprise could be undertaken. Women Against the Invasion of Lebanon and its sequel, Women Against Occupation were joint enterprises of Palestinian and Israeli members of the Communist Party, the anti-Zionist left and the feminist movement. Outraged by the invasion of Lebanon, they organized around a loose platform that principally voiced their protest against the war. Later the group broadened its target to include Zionism and its policies, especially as they affect women. Its main activities were a series of demonstrations and publications directed mainly to women, adding the feminist perspective to anti-Zionist activities. 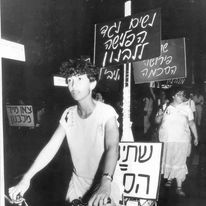 The women’s committee within the Progressive List for Peace was started by the socialist feminist women in the List, and based its activities on a draft platform of agreed items and compromises reached by the organization’s Israeli and Palestinian components. The committee ran candidates in the Na’amat and Histadrut elections, and published papers on a number of issues. This kind of feminist activism, as can be seen from the above examples, is expressed in sporadic ad hoc projects related to current events, to outstanding atrocities, to the pet idea of one individual or to the short-lived actions of a particular group.

Such groups work reasonably well for the duration of their existence, although their political clout and their radius of influence never reach beyond the periphery of feminist and leftist supporters. So their main achievement is the mere fact of their being a joint effort, and a series of publicity-oriented actions.

The second alternative open to women is political activism in any of the peace, socialist or anti-Zionist organizations, whose work is consistently carried out with hardly any feminist considerations. There, feminists support political platforms that, except for token concessions, ignore feminist theory and disregard women as subjects of political interest. When attending exclusively to women’s issues, most of the feminist involvement of women is among their peers. In that case, the central issues are limited to issues which interest that specific group of women – Palestinians or Israelis. Obviously, different objectives might be preferred if the choice was made with a common action in sight.

The question is, which alternative is the optimal choice?

Political activism in the midst of your peers is, at least in theory, easier and more productive. It is also true, in theory, that it is better to join the forces of women trying to reconcile the national and feminist angles.

In my opinion, the answer is not a clear-cut choice but a selective combination of options that take into account the constantly changing situation, the limited number of women involved and the importance of showing that cooperation is a viable option. It is imperative, although beyond the scope of this article, to find new ways to match today’s priorities, as it seems that the old and well used tactics and strategies, which never applied fully to this political environment, are now obsolete. The definition of new strategies is a sine qua non if any significant progress is to be made.

Our efforts in this direction are best channeled not to the top issues of the day as defined by the media, but to the basic matters that affect women and their lives. This approach might also be better understood and accepted by non-political women.

Limited goals are better suited to limited possibilities. The operative conclusion is that plans and strategies should aim for long term perspectives, built around basic questions that can be approached by any group.

Palestinian and Israeli men have opened channels of dialogue with interesting and positive perspectives that feminists must learn to use. We should also make better use of the lessons that have been learned by many women in a trial and error process that has been going on in many other parts of the world.

The main precondition is that the dialogue is kept open, allowing the interchange of information in meetings, in writing, by the creation of networks and such like. Hopefully these means will, in due course, become the seed from which a feminist Palestinian-Israeli movement will grow.