Not the smallest of the many problems that have afflicted Zionism from its origins as a modern political movement has been the divergence between its conception of world Jewry on the one hand and the reality of the living conditions and cultural identities of the world’s Jews on the other. The early theorists of Zionism held – and their intellectual progeny continue to maintain – that all the Jews of the world constitute a single ‘nation’, or ‘people’, whose members lived in ‘abnormal’ conditions exactly because of their geographical dispersal. It was this abnormality, they argued, epitomized in the Jews’ lack of a state of their own, that made them unable to defend themselves against anti-Semitism, which was seen as an eternal phenomenon independent of particular social and historical circumstances.

For many decades, Zionism was but one trend among various forms of Jewish nationalism that had arisen in eastern Europe, alongside myriad other nationalisms. As a species of nationalism, it exhibited the exclusivist features that mark any such ideology. But since its putative constituency was scattered in many different countries, and since the Zionist movement claimed to represent all the Jews of the world and not merely those who lived in the few countries in which the movement existed as an organized force, Zionist Ideology was impelled to place special emphasis on the alleged unity of the ‘nation’ – even more than nationalism commonly does. The task the Zionist movement had set itself was not merely to defend (or even to champion or aggrandize) a particular existing nation, but to convince potential members of the supposed nation that it actually existed. Later, as the colonization of Palestine began in earnest, disparate elements had to be forged into a genuine nation that would stand as the temporal embodiment of the mythical one.

This emphasis on ‘national’ unity, already unusually intense, was further aggravated by historical circumstance: the land on which the ‘normalized’ nation was to establish its state was inhabited by another people, who therefore had to be subdued or displaced if the Zionist project were to have any chance of successful application. Insistence on Jewish unity was therefore complemented by mounting hostility to the Palestinian Arabs, who were seen at best as mere impediments to Jewish freedom and at worst as agents of Jewish destruction.

These components of Zionist ideology, inherent in the very conception of the project of establishing a Jewish state in Palestine, were distilled into increasing purity in the alembic of Middle Eastern politics. By the end of the First World War, once British rule in Palestine was imposed, the Zionists needed the approval and support of Western powers. At the same time, the Arabs of the Middle East had launched a nationalist movement of their own, which had raised the demand for political independence – a goal which, if achieved in Palestine, would abort the Zionist mission.

Finally, the way the early Zionist settlers went about establishing what would later become the socio-economic foundations of the state of Israel, was to defend and expand an exclusively Jewish economy implanted within Palestinian society, for the Jewish state required Jewish workers, Jewish peasants, Jewish factory owners, Jewish policemen, and even, as one poet of the twenties once put it, Jewish thieves and Jewish prostitutes. Add to this the fact that Zionism was in origin a European political movement imbued with the culture and political attitudes that prevailed in Europe at the time, among which were a general contempt for ‘the Orient’ and a racist conviction that non-European peoples were congenitally inferior.

The state of Israel was thus founded by a movement whose members, leaders, culture, and ideology were European, a movement that preached Jewish unity and exclusivism and stood in the forefront of a political and military struggle against a non-European people, the Palestinian Arabs.

But when that state declared its independence in 1948, acting in the name of all the world’s Jews, the vast majority of its potential citizens stayed put. Even with the influx of tens of thousands of survivors of Nazism, who were denied any choice of destination, the Jewish population of the new country remained dangerously small. The 1950s, however, saw a massive immigration of Jews from Arab countries, in part because of the anti-Jewish outbursts in these countries inflamed by the 1948 war, but also as a result of active efforts by a Zionist leadership hungry for more Israelis. A number of Arab states were nearly emptied of their Jewish inhabitants. Thus it was that nearly half the Jewish population of Israel came to be composed of ‘Oriental Jews’.

Since these people were Jews, they were counted among the Jewish nation, and therefore shared in the privileged status all Jews in Palestine enjoy at the expense of the indigenous Arabs. On the other hand, they were also seen as part of the despised Orient: many of them spoke Arabic, were shaped by Arab culture, looked like Arabs, and shared many of the social attitudes and modes of behaviour of the countries in which they had grown up. Although members of the privileged nation, they were brought – in many cases lured – to Palestine to perform the most unenviable tasks, so that while they did benefit from the advantages Zionism conferred upon Jews, they also suffered from the racism endemic to Zionism.

The state of Israel was built in struggle against the Orient; but once it had been built, about half its (Jewish) people were offspring of that same Orient. Neither the Zionist movement nor the state of Israel has ever been able to resolve that contradiction.

The Oriental Jewish population of Israel has internalized its position as second-class members of the dominant group in a kind of political split personality. There was a time, in the late sixties and early seventies, when many expected that the Oriental Jews would be a fount of radicalization in Israel, challenging the state apparatus and moving eventually to leftist, perhaps even anti-Zionist, positions. And there were some hesitant steps in this sense. By the late seventies, however, the Oriental Jews had become the largest component of the electoral base of Menachem Begin’s Likud government, and today they are widely seen as the mainstay of the right in Israeli politics. 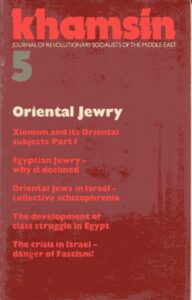 In ‘Oriental Jews in Israel: Collective Schizophrenia‘ (Khamsin 5), A. Hoder, a leading Israeli civil-rights activist writing under a pseudonym, offers a riveting portrait, based on a conversation overheard in a public-service taxi travelling between Tel Aviv and Jerusalem, of the psychological contortions to which many of Israel’s Oriental Jews fall victim. This is followed by a description of some of the more subtle forms of racism that permeate Israeli society.

In ‘Class Divisions in Israeli Society‘ and ‘Oriental Support for Begin: a Critique of Farjoun‘, both published in Khamsin 10, two Israeli members of the Khamsin editorial group, Emmanuel Farjoun and Avishai Ehrlich, the former a professor of mathematics, the latter a sociologist, debate the reasons why so many Oriental Jews have aligned themselves with the right wing. The two authors agree that the phenomenon is grounded in the socio-economic structure of Israeli society, but disagree sharply about its class implications.

The Oriental Jews, of course, are far from the only victimized group in Israel. Indeed, nearly everyone would agree that their place in the Israeli social structure and their political psychology are strongly affected by the even more deplorable conditions of those Palestinian Arabs who live under Israeli rule. The political and military sides of those conditions have been widely treated in the international press. Less attention has been paid to the critical part played by Palestinians in the Israeli economy. ‘Palestinian Workers in Israel‘ (Khamsin 7), also by Emmanuel Farjoun, is a thorough statistical survey of the subject. Although this article was written in the late seventies, the qualitative picture it presents has altered little, despite the inevitable quantitative changes. It was originally written in Hebrew, and published in Jerusalem as a pamphlet by the Socialist Organization in Israel (Matzpen), in 1978.