Saluting the Workers of Egypt! 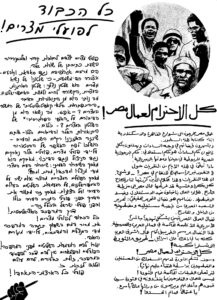 At the time of this writing, the Egyptian workers are out in the streets of Cairo and Alexandria.
They are raising their fists against Sadat and say unequivocally that the Egyptian president’s rule is exploitative: it is the rule of the Egyptian bourgeoisie, linked for life and death to imperialism. What remains today of the theories about the ‘non-capitalist development’ of Egypt’s regime? – Zero. What remains today of the talk about the ‘progressive nature’ of Egypt’s regime? – Nothing.
Those theories and that talk – which were constantly rehearsed by RAKAH [the Israeli Communist Party] – are thrown into the dustbin of history by the Egyptian workers. These workers are fighting against exploitation and oppression. Their struggle is the real liberation struggle: for liberation of the Egyptian people from its exploiters and oppressors, at home and abroad.
The Egyptian workers’ struggle poses a direct threat to imperialism, the ruling classes in the Arab world, and Zionism. This struggle marks out the path for the workers of the entire Arab East, including the workers of Israel – the path of the socialist revolution!
We salute the workers of Egypt!
The price of their shed blood will be exacted by the revolution from the exploiters and oppressors, in their final overthrow.

Let the ruling classes tremble at the revolution!

The workers and peasants have nothing to lose in the revolution but their shackles.
They have a whole world to win.
Workers of all countries – unite!
[19 January 1977. Published as editorial in Arabic and Hebrew, in issue 80 of Matzpen, 10 February 1977. ]