The Scandal in Gush Etzion – Dr. Gabriel A. David

This is an open letter by Dr. Gabriel A. David (P.O.B. 7475, Jerusalem), to Mr. Yigal Alon, the deputy Prime Minister at the time, on the colonization of the occupied West Bank. It appeared as a paid ad in Haaretz daily newspaper on the 23 October 1969. 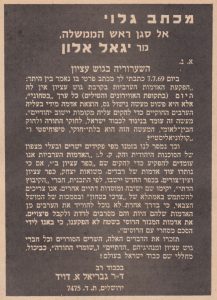 The translation of the open letter reads as follows:

The Scandal in Gush Etzion

“The confiscation of the Arab land near Gush Etzion has no ‘security’ value today (in the era of aeroplanes and missiles), but is simply a brutal eviction, grabbing land from the Arab legal owners for the establishment of Jewish settlements”.

This action reflects on Israel dignity, on the laws of the Torah and international law. This is an unlawful action, a “colonialist” annexation!

This is what I was told at the time by frank and honest people in the Jewish agency and the Keren Kayemeth: “We are going to confiscate the Arab land to establish Kfar Etzion B, although there is still enough land belonging to Revadim, Masuoth Yitzhak, Kfar Etzion and Ein Tzurim [Jewish settlements in the region before 1948]. According to the plan, the settlers in the new village will be  members of the Religious Kibbutz movement, and they will establish a Yeshiva and other religious institutions. We have to use the pretext of ‘security needs’ and the authority of the military governor as there is no other way to drive out the Arabs from their land because they refuse to go and accept [our] compensation. The lands of the Russian monastery we have not confiscated because we arrived at a commercial agreement with the Russians”.

Remember these things, you vile ministers and all members of Gush Etzion with their “religious” and “Torah guardian” leaders that defame Israel’s name in the eyes of the world.