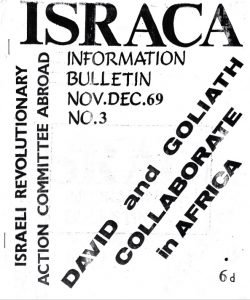 The following are excerpts from a leaflet distributed in Boston University, in the middle of October 1969, during a large public meeting:

Yesterday, thousands of Americans demonstrated for ending the war in Vietnam. Perhaps their hopes will be rewarded. War in the Middle East, however, continues and continues. For General Ariel Sharon (Israeli Army), who is speaking at Boston University‘s Hillel Club at 8 p.m., we have seven questions:

1) How can Israeli officials declare that they represent “The only democracy in the Middle East” when they deny the most elementary civil rights to the Arabs who have lived in Israel since 1948?

Some facts: Although “full legal rights” were nominally given to “Israeli Arabs” after they had suffered many years of subjection to military law, these rights exist only on paper. The half million “Israeli Arabs” are still not allowed to form political groups or to print their own newspapers. House arrest is still employed to silence such men as Sabri Geries, author of “Les arabes en Israel” or Khalil Toameh, a member of Matzpen.

2) How can Israeli officials promise democratic rights to all Jews when Oriental Jews (60% of the Jews in Israel) remain subject to blatant discrimination?

3) How can Israeli officials claim that Zionism is the only answer to antisemitism when they intensely cultivate the friendship of antisemites?

Lest we forget: In February, the notorious French antisemite, Jacque Soustelle, former head of the [clandestine military organization of French settlers in Algeria] O.A.S., was an official guest of Israel’s parliament. In April, the ex-Nazi German press tycoon, Axel Springer, was the official guest of Teddy Kollek, mayor of Jerusalem; In June, David Ben Gurion presented a siIver-bound Bible to General Arturo da Costa e Silva, Brazil’s dictator. Costa e Silva‘s brother heads an organization whose avowed purpose is to “purge Brazil of Jews and Communists”.

4) How can Israeli officials pretend to support democracy in Africa when they seek close political and commercial ties with South Africa and Southern Rhodesia?

5) How can Israeli officials condemn Nazi genocide while they support American genocide in Vietnam and employ genocidal tactics against Arab civilians?

Let us wake up: Israel and South Vietnam maintain excellent relations. Anti-Vietnam demonstrations by Israelis are generally broken up by police. In air raids across the borders, Israeli planes not only employ Napalm, but strike civilian targets, such as the Ghor Canal in June. This canal was the main source of water for Jordan’s peasants. On the ground, Israeli forces force peasants to evacuate their villages, destroy houses, and confiscate Palestinian’s means of livelihood.

6) How can Israeli officials feign opposition to discrimination as long as the Law of Return remains on the books?

Privileges: Any Jew (defined by the Ministry of Interior as “a person whose mother is Jewish”) receives automatic immigration and citizen rights under the “Law of Return” This means that persons who are not born in Israel automatically receive privileges that are denied to Palestinian refugees who may have been born in Haifa, or Safad or Jerusalem.

7) How can Israeli officials claim that they represent an independent nation when Israel’s economy is so dependent upon American aid and the contributions of wealthy American Jewry?

Build Revolution in the Middle East!

Down with Israeli Occupation of Palestine!

Get American Oil Companies out of the Middle East!

This leaflet is printed and distributed by

The American Friends of Matzpen (the Israeli Socialist Organization),