In 1997, after years of stories and newspaper items, I decided, as a student at Tel Aviv University, to write a seminar on Matzpen. At the end of that year the Hebrew University held a conference to mark 35 years since the organization was formed. I went there to document the conference with a camcorder, and found myself launched into a journey to follow people and ideas that until then I didn’t know much about. I made the film because I met Israelis, most of them native-born, whose personality, their command of Hebrew, their abilities and connections, could have taken them to any position they might have wanted in Israeli society – but their values and their courage to stick to them and act accordingly put them on a collision course with the whole society in which they grew up. To me, younger than them by 30-40 years, born when Matzpen was already starting to break up, it was a great privilege to know these people, to thank them, and above all to recall the ideas for which they fought. 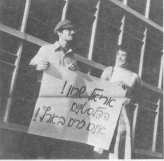