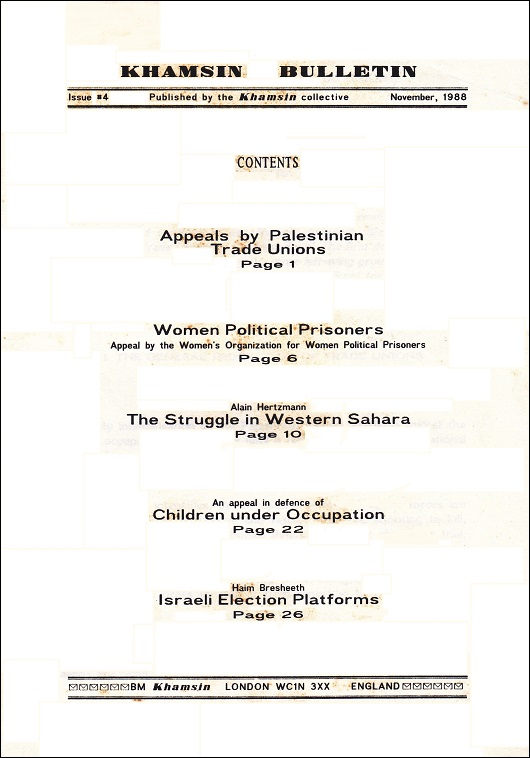 The Palestinian working class and its trade-union movement is bearing the brunt of many of the Israeli fascist measures. Eight out of the eleven members of the Executive Committee of the General Federation have been arrested, including the General Secreta­ry, Mahmud Ziadah. More than 50 other members, including members of the Federation's Council, secretaries of branch unions, members of Administrative Committees and active unionists, have also been arrested.

This English-language appeal, dated 2 November 1988, was sent to Khamsin by the Women's Organization for Women Political Prisoners, a committee recently set up in Israel, devoted to defending the rights of women political prisoners, both Palestinian and Israeli.

The Struggle in Western Sahara ‒ By Alain Hertzmann

The struggle for independence is foremost in the mind of the Polisario. The declared intention of the Polisario is the setting up of an independent, secular, republic, with a multi-party system, where religion is a private matter, and where the status of women will be equal to that of men.

In Defence of Children under Occupation

The cases of four Palestinian children, aged 6 to 9, who were arrested by the Israeli army in the occupied West Bank.

The Israeli Elections: An Introduction to the Manifestoes ‒ by Haim Bresheeth

A guide for the "offerings" of the different parties contending the Israeli elections for the Knesset, on 2nd November, 1988. This election has been billed as the "most important in Israel's history" by a whole number of pundits, arguing that the resulting government will be the one to face the new challenges, internal and external.