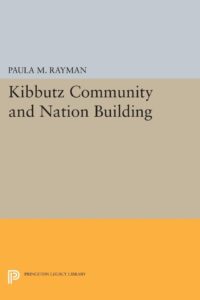 Paula Rayman has written an interesting book which, with some reservations, can be added to the growing list of books and articles that are gradually helping to shape an acceptable perspective and analysis regarding Israeli history and social structure. This relatively new corþus of publications challenges the view that used to dominate the social sciences literature, especially that part of it inspired by the Israeli school led by S.N. Eisenstadt. Her particular contribution is important, since it relates to the heart of the Zionist myth – the kibbutz.

Paula Rayman was led to study the kibbutz in her search for a ‘constructive utopian vision’ which would aid the struggle for socialist change. In this she is no different from other Westerners who went to Israeli kibbutzim, motivated by such a quest. However, unlike many others, she did not limit her perspective to the internal dynamics of the kibbutz, but studied it in its national and (in the post-1948 period) regional context. As a result, there emerges a picture very different from the popular myth of the kibbutz, even in the latter’s early ‘utopian’ beginnings. The kibbutz can be seen as a commune not so much of utopian socialists as of militants of a colonialist-nationalist movement.

This is a bitter pill to swallow, even for the author herself. Although all the crucial data are presented, she hesitates to follow them to their ultimate conclusion – and this is the book’s main weakness. Her assessment of the early period of the kibbutz still defines it, at least in that early phase, as a socialist community; the Zionist movement, described as colonialist, militaristic and nationalist, is seen as external to the kibbutz, although intimately connected with it. But one cannot understand the kibbutz and the dynamics of its development unless one recognises that it was never an autonomous entity. It was always totally dependent on the Zionist project and formed an integral part of it. It used socialist language but had, at best, a collectivist-voluntaristic ideology, inherent in which was the exclusion and dispossession of others.

The subjective view of the kibbutzniks, who saw themselves as socialists, is totally dependent on blocking (mentally and legally) all non-Jews as potential partners in the ‘utopian socialist’ vision.

The case study which is the focus of the book can serve as a perfect illustration of this truth. It is the story of Kibbutz Hanita (it is given the fictitious name of Har, but the data in the book makes its identity unmistakable). Hanita was established in 1938, in an area which previously did not have any other Jewish settlement but was densely populated by Palestinian fallahin, tenant-peasants who lived in villages and worked lands belonging to absentee landlords. Hanita’s establishment gained a special political importance not only because of its location, which was particularly isolated (although the sites of most kibbutzim were chosen in strategic frontier positions), but also because of the time of its establishment, at the height of the Palestinian Revolt.

Haim Weizmann, the leader of the Jewish Agency, cabled the settlers: ‘Go to Hanita, regardless of cost’ (p 40). Volunteers (men) of the three kibbutz federations manned the initial settlement, which was built using the ‘Tower and Stockade’ system. Hanita’s establishment also became a turning point in Zionist military strategy, as Orde Wingate, the British officer, friend of the Hagana, trained there his Night Unit composed of British soldiers and Hagana members, for offensive rather than defensive tactics.

The local inhabitants who lived in what was designated as the site of the permanent kibbutz settlement refused to move, and were physically evacuated by the settlers. Once this ‘trifle’ was over, the kibbutzniks could establish their ‘socialist utopia’, and devoutly work their land. Or rather, not their land, but a land leased to them by the new owner, the Jewish National Fund, whose consittution strictly forbids sale or even leasing of any of its lands to non-Jews.

The immediate armed confrontation with the local inhabitants that took place in Hanita may have been more dramatic than in many other kibbutzim, and may be more characteristic of the later period in the establishment of kibbutzim. However, this use of kibbutzim as a military front position has been universal. The level of confrontation with local Palestinian peasants depended on the extent to which the absentee landlords or the Ottoman or British police had already accomplished the task of removing the peasants from the locality before the Zionist colonisation itself took place, as well as on the degree of organistion of the Palestinian resistance.

What is important to emphasise is that the confrontation between the kibbutz and the local Palestinians was not only national but had also a class dimension. Hanita lands were bought from absentee landlords through a secret agent. The secrecy however, was only preserved vis-à-vis the local fallahin; information of the sale was given not only to the British but also to Amir ‘Abdalla of Transjordan and the Lebanese government, who ‘kept the secret’ and thus gave their silent consent to the deal.

The national and private capital which bought the kibbutz lands also enabled the kibbutz to continue to survive during all the following years, on a subsidised level, until profits from the kibbutz industries –which used hired labour, Jewish (Oriental) and Palestinian – made the kibbutz economically ‘autonomous’ (but still getting preferential taxation treatment from the state).

In view of all this, it is difficult to see how the kibbutz can be described as either autonomous or a socialist unit…

Paula Rayman shows how the various components of early kibbutz ‘socialist’ ideology – collective ownership, the ‘religion’ of labour and self-labour – were functional for the pragmatic needs of the settlers, on the level of the individual kibbutz, and of the Zionist movement as a whole. (Even the component which she claims did not represent a strictly pragmatic concern, the ‘religion’ of labour which encouraged a spiritual direct contact with the land, can be said to be functional to the extent that this direct relation hid the other people who existed on this land).

The changes in the principles which fashioned kibbutz life in its earlier and later stages do not signify transition from socialist to capitalist ideology as Paula Rayman claims, but rather a shift in its pragmatic needs, including the pragmatic need for ideology itself, deliberations and reluctance to shift the ideological discourse notwithstanding. Since its earliest days the kibbutz, like the whole Zionist movement, was eclectic in the means it applied to achieve its national-colonial goals.

Deviations from socialist-egalitarian principles existed not only in the relations between the kibbutz community and its social environment, but also internally. Paula Rayman analyses the sexual divisions, which placed women in inferior positions in the kibbutz since its inception. She also describes how other social differentiations develop in the kibbutz and come to compose its internal stratification.

The most important contribution of the book is the detailed description of the kibbutz in its regional context in the post-1948 period. She shows how the raison d’être of the kibbutz as a Zionist frontier post which promotes national and class exclusivity continued, with changes, also after the establishment of the state, and were applied not only to the local Palestinians but also to the Oriental Jews who came to live in development towns and moshavim in the region. The concept of ‘region’ itself, like many other concepts in the Zionist terminology, is ‘doublethink’. Not only the catchment area of the ‘regional’ high school, but even the local municipal council itself excludes the local Palestinian and Oriental Jewish communities. The ‘regional’ industries not only exclude them from ownership but have become a class tool for exploiting them as hired labourers.

This form of exclusionary ‘doublethink’ has not changed much since the time the kibbutz was established. One of the poems (cited at the end of the book) which were composed in honour of the establishment of the kibbutz in a thickly Palestinian populated area declares:

On the border of the north,
In desolate wilderness
We have fixed a habitation…