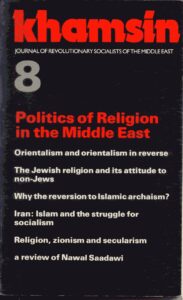 Karl Marx begins his Introduction to the Critique of Hegel’s Philosophy of Right (published in 1844) with the observation: ‘As far as Germany is concerned, the criticism of religion is essentially complete, and the criticism of religion is the presupposition of all criticism.’ The second half of this assertion is surely true not only for Germany, but for other parts of the world as well, and in particular for the Middle East.

However, if in the Germany of 1844 Marx was able to regard the criticism of religion as ‘essentially complete’, the Middle East today ‒ almost a century and a half later! ‒ has yet to shake off the medieval incubus of religion and clericalism. As far as religion is concerned, the Middle East has not quite broken out of the Middle Ages. The work which in western Europe was undertaken by the Enlightenment and developed by early 19th century radical philosophy is, in the Middle East, still to be performed.

In the Arab world, not only has there never been a serious bourgeois-liberal challenge to religion and clericalism, but the left too has for the most part avoided the issue or pussyfooted round it. With very few exceptions, left-wing and socialist theorists have either believed that religion is a mere ‘epiphenomenon’ and that fighting against its influence is a waste of energy, or have simply been too opportunistic and frightened to stick their necks out.

But recent events have demonstrated the utter futility and danger of this ostrich policy. The triumph of obscurantist reaction in Iran – for that is what the Islamic Revolution is ‒ and the resurgence of the Muslim Brotherhoods in the Arab countries show that the problem of religion must be confronted as one of the major issues in the Arab-Islamic world.

In Israel too clericalism and religious fanaticism have in recent years come to play an increasingly dominant role. Medieval Judaism, which crystallised after AD 800, remained virtually intact until the French Revolution. In the 19th century a bourgeois movement of Jewish Enlightenment began to gather momentum and posed an internal (that is, Jewish) challenge to medieval Judaism. But this movement, humanist, assimilationist and cosmopolitan, was overtaken ‒ when it was still fragile and vulnerable ‒ by the rise of modern antisemitism. Zionism arose on its ruins. If the Jewish Enlightenment was a negation of medieval Judaism, zionism was a negation of that negation. Although ostensibly secular and in part even ‘socialist’, zionism reverted to some of the most reactionary, xenophobic and isolationist strands of medieval Judaism. After the June war of 1967, and especially after the rise of the Begin government ten years later, these reactionary religious strands have risen to the surface and have become predominant. A confrontation with medieval Judaism has thus become an urgent task; without it, a critique of zionism remains essentially incomplete.

In the present issue of Khamsin we take up the sadly neglected twin tasks of confrontation with Islam and Judaism.

Sadik al-‘Azm’s article deals with the broader subject of Orientalism ‒ a concept which has come into vogue following the publication of the important book of that name by Edward Said. Orientalism is the totality of ideological constructions formulated by western academics and politicians, through which they have traditionally viewed and dealt with the unfamiliar world of the ‘Orient’ and Islam. Starting from a critique of Said’s methodology, the article then reverses the concept, and uses it to launch an attack on the ideology of ‘Orientalism in Reverse’ current among some Arab academics and left intellectuals, who in the wake of the Iranian revolution have grown enamoured of Islam.

Lafif Lakhdar analyses the various internal and external causes for the recent resurgence of what he calls Islamic integralism ‒ a trend embodied in the Muslim Brotherhood as well as in Khomeinism, which aims to subordinate the totality of social life to the tyranny of Islamic archaism. The emphasis of this article is on the Muslim Brotherhood in Egypt and other Arab countries. This movement is seen in its historical and social context, and the article traces its historical antecedents in movements of the late Ottoman empire.

Mohammad Ja’far and Azar Tabari focus on the Islamic Revolution in Iran. Their article (written before the Gulf war between Iraq and Iran) analyses the nature of Khomeinism and shows that Islamic fundamentalism, far from being an epiphenomenon, is at the very core of the new Iranian republic. In the final part of their article they draw certain important political conclusions for the strategy of the left in Iran.

Israel Shahak’s essay has as its main focus an examination of the attitude of medieval Judaism (which he calls ‘classical Judaism’) towards non-Jews. Around this theme he mounts a formidable analysis and critique of medieval (‘classical’) Judaism as a whole. This article, mercilessly controversial and polemical, is in the tradition of the Enlightenment; it owes little to Marx, much to Voltaire. Like the latter, Shahak will no doubt be fiercely attacked by obscurantists of all kinds. We make no apologies for printing this article; the fact that Jews have been among the main victims of racism in this century cannot serve as a pretext for refraining from exposing and criticising the racism which zionism has inherited from medieval Judaism.

For reasons of space we have had to hold over some of the material on religion to the next issue of Khamsin, which is now in preparation. This material includes the second half of I. Shahak’s essay, dealing with the social aspects of medieval (‘classical’) Judaism, together with an appendix containing a detailed account of the main rabbinical laws directed against non-Jews.

The annual meeting of the Khamsin collective, held in July 1980, decided on the following change in the journal’s structure. The group of members based in London and directly involved in the publication of the journal will now constitute the Editorial Group. Other members of the collective, in London and elsewhere, will, as before, be consulted on all important matters. This decision does not in any way change the policy and aim of Khamsin.

A debate on imperialism. The phenomenon of imperialism and its influence over the course of events in the Middle East has been taken for granted by almost all political currents in their relation to the region. It appears that the Ba’thist regimes, Islamic republics, bourgeois nationalists, the Palestinian movement, and the far left ‒ despite their differences ‒ are agreed in conceiving themselves to be in continuous confrontation with this powerful force. Imperialism is constantly evoked by both the ruling classes and their political opponents, often on the flimsiest of pretexts, as the cause for their conflicts and crises (for example, the Lebaneses civil war, the Iranian hostage crisis, the Gulf war). Is it not possible that imperialism is increasingly being used as a sort of political bogeyman? If so, then what does imperialism mean concretely today in relation to the Middle East? What are its real economic foundations and social agents?

These are some of the questions that the Khamsin collective, in its last annual meeting, decided to explore in future issues of the journal. It was felt that the usage of the term imperialism has undergone such far-reaching vulgarisation in the Middle East, as to render a reassessment of its real content a matter of some urgency.

We welcome contributions by our readers on this controversial subject and look forward to a stimulating and fruitful debate on the pages of our journal.