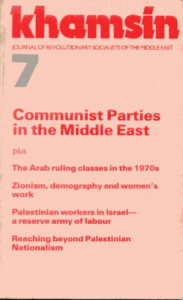 Articles on and by the Arab communist parties can be found in the central press of the world communist movement, in numbers varying from period to period. The main journals are:

For the years up to 1935, the following bibliography is very helpful for locating the articles:

Books on CPs of the Arab East in general

A guide to the literature on communism in the 1950s, in most cases inspired by cold-war ideologies, in the Arab world as well as in the West, is provided by the following article:

Books on the Syrian-Lebanese CP

Books on the Palestinian-Israeli CP

Books on the Egyptian communist movement

These are three volumes of the author’s History which deals mainly with the communists and their forerunners, the early East-Arab socialists (Shumayyel, Antun etc.). The coverage is not evenly detailed for the various periods, but this is largely due to the fate of the Egyptian communist movement itself, which was sometimes suppressed and reduced to total silence and at other times was badly split.

These two books supplement the author’s History by quoting extensively from the Egyptian leftish press. The second book concentrates on the latter half of the 1940s.

Books on the Iraqi CP