The members of the Khamsin collective announce with deeply-felt grief the sudden death of Nigel Disney, a dedicated member of our collective. Nigel, born in Nottingham, died at the age of 26 on the 24 June 1978 in a London hospital.

Nigel became involved in third world struggles during his studies at the School of Oriental and African Studies. He was a member of several groups concerned with Asian politics, Indo-China, Korea and Hong Kong. During ‘his stay in the United States, he became involved in Middle Eastern issues and the Palestinian struggle. Between 1975 and 1977 he was a staff writer and editor at the Middle East Research and Information Project in Washington DC. Upon his return to Britain last year, he worked for Events, an English-language Middle Eastern magazine, and devoted most of his spare time to the preparation of the publication of Khamsin in English. Nigel’s capacity for work was far greater than his frail physical appearance revealed.

His death leaves us all bereaved. We have lost a dear comrade and a tireless and resolute worker for our cause. His memory is with us. 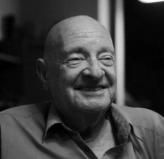