Khamsin is a journal by revolutionary socialists of the Middle East. It is also for them, and for socialists in other countries who are interested in that part of the world.

Khamsin is a committed journal. It aims not merely to reflect and express, but to be part of the struggles for social and national liberation. All these struggles:

All these are inseparable aspects of one struggle, whose goals can be achieved only through the revolutionary overthrow of imperialist domination, the Zionist power-structure and all the existing regimes in the region, and the establishment of a united socialist Arab world, within which the non-Arab nationalities will also enjoy, by right and in fact, full social equality, individual liberty and national freedom.

The members of the Khamsin editorial collective, from various countries of the region and belonging to different political tendencies, are united around this aim. However, Khamsin is not a party organ but a forum in which the aims themselves, as well as the strategy for achieving them, can be debated and discussed among the various shades of revolutionary left opinion.

Four issues of Khamsin have already been published in French by Editions Francois Maspero and have been well received. Encouraged by this, we have decided to go over to English, in order to make Khamsin accessible to a larger readership both in the Middle East and elsewhere. In the future, we hope to publish Khamsin in Arabic and Hebrew as well.

An anthology volume, with English translations of the most important articles from the first four issues, is in preparation and will soon be published by Pluto Press 1.

In general, part of each issue is devoted to a central theme; in this issue, it is Oriental Jewry and its relationship with Zionism. In our next issue the central theme will be women in the Arab world. 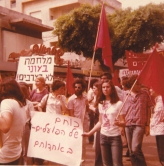