The following statement was published on 19 November 1977 by the Socialist Organization in Israel (Matzpen), jointly with Harakat Abna’ al-Balad (Sons of the Village Movement), The Revolutionary Communist League, and the editorial board of Key. Issued in Umm al-Fahm, Israel. (עברית)

Public attention in this country and throughout the world is at present directed at [The Egyptian president, Anwar] Sadat’s visit in Israel, and rightly so. Many people genuinely hope that this visit will open an avenue to the peace which is being discussed by everybody. Can the visit realise these hopes?

Our answer is No.

Sadat’s visit is designed to overcome ‘procedural problems’, by bypassing the recognised representative of the Palestinian Arab people – the Palestine Liberation Organisation (PLO).

Even if Sadat manages to get [Israeli prime minister, Menahem] Begin’s consent to the return of Sinai to Egypt, or if Begin manages to wrest out of Sadat portions of Sinai, the Palestinian problem will still be unsolved, and so peace will not be achieved.

The road to peace must go through the recognition and im­plementation of the right of the Palestinian Arab people to self ­determination and to return to its homeland. Any settlement reached behind the back of the Palestinian Arab people or at its expense, and without the participation of its recognised representative, the Palestine Liberation Organisation (PLO), will not bring peace to the peoples of the region; rather, it will be a prelude to a new war.

So long as in reality the Palestinian Arab people under Israeli rule is subjected to confiscation of lands, demolition of homes, colonisation, Judaisation of the Galilee, suppression of basic human rights, and murder of citizens, like the seven Victims of the Land killed on the Day of the Land [March 30, 1976] and [the man killed by the police] in Majd al­Kurum – all talk about peace in Jerusalem, Cairo, Geneva or anywhere else is an illusion and an exercise in deceiving the people who are longing for peace.

The road to peace goes through Palestine, and is not that of Sadat. 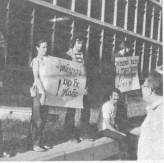