On the Present Situation in Israel

[The following is a translation of the first part of a statement by the Socialist Organization in Israel (Matzpen), “On the Present Situation in Israel and the Region”, written in September 1977 following the May 1977 elections which caused for the first time in Israel a change of the ruling coalition: the zionist Labour led coalition was replaced by a zionist-right led coalition.] 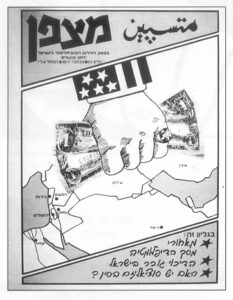 The elections to the Ninth Knesset have not changed the nature of Israel’s regime or the character of the state. Israel was and remains a state based on the capitalist order of exploitation; a state that is not only an outcome of the Zionist colonization project, but also an instrument for its continuation and expansion.

Wherein, then, lies the change that everyone has been discussing and chewing over since the 17th of May 1977? In our opinion, it is a change in the balance of forces within Israel’s ruling class.

In the past we described political power in Israel as a partnership between the bureaucracy and the bourgeoisie; a partnership in which the ‘labour’ bureaucracy of the Zionist ‘left’ played the senior role and the bourgeoisie played the junior role; a partnership in which the order of things was the reverse of what is usual elsewhere: instead of the bourgeoisie determining who were to be the political functionaries representing it in state institutions, it was rather the functionaries who determined who was to be bourgeois. We all remember Finance Minister Pinchas Sapir’s ‘system of handwritten notes,’ which turned ordinary mortals into capitalists by the grace of the Alignment government. It was a system that Levi Eshkol, Sapir’s tutor and mentor, described as “clearing the way and paving the road for private capital”.

“From class to nation”

It can now be asserted that the change manifested in the last elections reflects a change in the balance of forces within the ruling class in Israel: the weakened bureaucracy has given way in power to the strengthened bourgeoisie. Although the regime has remained unchanged, political power has moved from the Zionist ‘left’ to the Zionist right.

This was the conclusion of a long process in which the Zionist ‘left’ had decayed and crumbled. It did not muster the strength to renew itself but was consumed by its internal contradictions. While it continued to swear allegiance to its ideas of a ‘workers’ ownership’, ‘working-class economy’ , ‘egalitarian society’ etc. – all, of course, exclusively Jewish – this ‘left’ engaged in raising capital in a  spirit of cross-class loyalty to the state under the slogan “From class to nation”, and in establishing  state capitalism.

The Zionist ‘left’ became increasingly detached from the popular strata it purported to represent, and its leaders and functionaries became the favourites of the bourgeoisie. There were also many cases of defection from the ‘left’ to the right. The differences have become blurred to the point that former Mapai members are  today a respected part of the Likud, and an important component of the Democratic Movement for Change; and a further shift to the right is in full swing. The overlap between right and ‘left’ has spawned an entire stratum of officers, technocrats, bureaucrats and bourgeois locked in each other’s embrace, so that it is difficult to tell them apart.

The various factions that make up the Likud, like those that make up the Zionist labour movement, are all entirely Zionist, but within Zionism they used to represent, and still claim to represent even today, different ideologies. The Zionist ‘left’ laid emphasis on step by step realization of Zionism, by means of gradual colonization, while the revisionists raised the slogan “In blood and fire Judea fell – in blood and fire Judea will rise”. Nor should it be forgotten that the phraseology of the Zionist labour movement was drawn from the pathos of European social democracy, while the ideological pathos of the revisionists was that of the fascist movements in Europe.

These differences became irrelevant, in themselves, with the establishment of the State of Israel. Worship of the state and sanctification of statehood were in fact common currency of the Zionist ‘left’ as well as the Zionist right. This does not mean that there is no difference between a coalition government of the Likud with the religious parties and that of the Labour Alignment with the religious parties. M. Begin came to power exactly ten years after the June 1967 war and the occupation of the Arab territories. In some sense, a majority of voters voted for the continuation of the occupation, for the continuation of the oppression and for the continued expropriation of the Palestinian Arab people. And in this area the new regime may display its muscles and put on a show of strength. It has in fact made a start in this performance.