[This obituary was published in Matzpen 73, March–April 1975. Translated from the Hebrew by the author.] 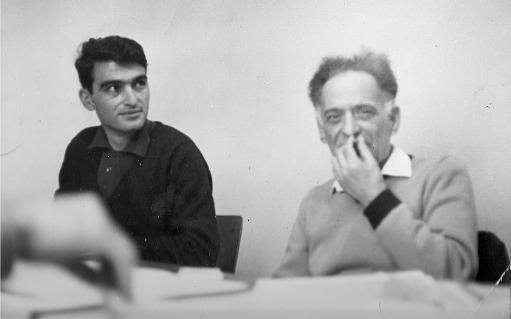 On December 25, 1974, Comrade Jabra Nicola passed away following a long illness. He died, at age sixty-three, of cerebral hemorrhage in his home in London.

Jabra was born in Haifa. At the beginning of the 1930s he joined the Palestine Communist Party and soon became a leading member of the party. He grew critical of Stalinism, which at the time totally dominated the international communist movement. The first impetus for this came from an article by Trotsky against the catastrophic Stalinist policy regarding Germany. An Arabic translation of that article appeared in an Egyptian paper, and so came to Jabra’s notice. This is how he was attracted to the Trotskyist outlook, which he upheld to the end of his life.

At the outbreak of the Second World War, Jabra was arrested [by the British Mandate authorities] together with other communist activists, and imprisoned in an administrative detention camp as “suspected of sympathizing with the enemy.” This was bitterly ironic because right from the beginning of the war Jabra was for supporting the antifascist side—contrary to the position of the official communist movement, as well as to that of most Trotskyists. Following the Hitlerite invasion of the Soviet Union, the communist detainees, including Jabra, were released.

In the 1940s Jabra officially joined the Trotskyist Fourth International, and eventually became a member of its leadership. The position of the world Trotskyist movement on the problems of the Middle East was formed largely under his influence. At the same time he remained a member of the Communist Party. Although he did not keep his Trotskyist views secret, the leaders of the party—intellectual Lilliputians compared to him—did not dare expel him. But they gradually removed him from all positions of direct political influence and confined him to literary work. Even subject to this restriction, Jabra found an outlet for his talents: he published important articles and studies on Arab history and Arabic literature, as well as translating literary classics into Arabic. He was particularly proud of his translation of Tolstoy’s Kreutzer Sonata.

In the beginning of 1963, Jabra came across one of the early issues of Matzpen (which started publication in the autumn of 1962); this soon led to contacts between us and him. It transpired that his views and ours had much in common, and he began to draw close to our organization. His first article in Matzpen (about the situation in Iraq following the coup of Abd as-Salam Arif) was published in issue number 5, in April 1963. Jabra started to collaborate closely with our organization, and formally joined it at the end of 1963.

Jabra had a major profound influence on the direction taken by Matzpen, especially regarding the Arab East and Zionism. On this, I take the liberty of quoting from an interview I gave in 1972 to the Italian journal Quaderni del Medio Oriente.

“He was much older than us, the founders of the group: about twenty to twenty-five years older. He had gone through the earlier thirty years of the history of the world revolutionary movement, but was not soiled with all the Stalinist shit. He remembered from his own experience things we knew only from books. In particular, a vital period of the Zionist colonization process was for him a living memory. But more important than this: he had exactly what we lacked—a coherent conception of the Zionist colonization process, and in particular the way it affected the Arab society in Palestine. From him we got a much better and deeper understanding of Israel as an embodiment of Zionist colonization. Also, he had a conception of the Arab revolution as one and indivisible process. Matzpen’s positions on all these matters were adopted essentially under his influence. Some of his points we adopted almost at once, because we saw immediately that they were plausible. Other points we accepted after a longer period, with some modifications, perhaps. Of course, it was not a mechanical or completely one-sided process but a dialectical one. Anyway, his influence is clearly discernible in practically all our documents on Zionism and the Arab East” [This quote is not retranslated from the Hebrew, but taken directly from the original English transcript of the interview, dated April 15, 1972].

I thought it right to quote these words, precisely because they were not said after his death, but when he was still alive; moreover, they were said shortly after a painful split, in which we found ourselves on different sides.

Jabra’s thinking was always remarkable for its independence, originality, and consistency. He was not in the habit of deferring to intellectual authority, not even that of people he most respected and esteemed.

Let me note briefly his main views on the Arab East—views that he instilled in many people in this country, in the region, and around the world.

First, as mentioned above, he instilled in us the view of the unity of the Arab revolution. This unity is twofold: in both time and place.

Unity in time, because he resolutely rejected the idea that the Arab revolution must go through two separate stages, a bourgeois-democratic stage followed only later by a separate socialist stage. His profound historical analysis of the Arab world showed that in this region, unlike Europe, there did not exist and had not developed in the past a bourgeois class distinct from the big landlords, which alone could lead the bourgeois-democratic revolution in a struggle against the feudal landlords. Regional and global conditions prevailing in our time no longer allow the rise of a progressive bourgeoisie able to carry out the classical tasks of the bourgeois revolution. Therefore these tasks too are left for the socialist revolution, led by the working class.

Unity in place, because the Arabs throughout the Arab East are one nation in the process of crystallization, but divided by imperialism following the First World War, whose unification is vital for the advancement and development of the region. This national unification is one of the democratic tasks that the bourgeoisie is unable to carry out, and so it too remains as a mission of the socialist revolution. On this issue, the unity of the Arab East, Jabra kept alive the tradition of the revolutionary movement prior to the Stalinist degeneration, and was a link between it and revolutionaries of the present generation.

Second, Jabra was uncompromisingly an internationalist. One of the expressions of his internationalism was his staunch support for the right of the Israeli-Jewish people to self-determination. In his and our view, the regional socialist revolution will overthrow the Zionist regime, and integrate the Israeli people as a partner in the future united socialist state of the Arab East. However, this partnership must not and cannot come about through national coercion by the Arab majority against the Israeli-Jewish minority, but only through free choice and self-determination. Jabra fought like a lion for this principle (which was not popular among the majority of the Arab left) and absolutely insisted on including the recognition of the right of the region’s non-Arab peoples to self-determination as one of the pillars of the program of the socialist Arab revolution.

Third, he criticized mercilessly all manifestations of opportunism of the left in the region. In particular, he often stressed the need to wage a vigorous struggle of ideas against the reactionary influence of religion and for women’s liberation. He severely criticized the majority of the Arab left, which behaves hesitantly and opportunistically on these two interconnected issues.
Of course, these few remarks cannot possibly exhaust Jabra’s world outlook. We have mentioned only those issues that he regarded as most important for the revolution in our region. 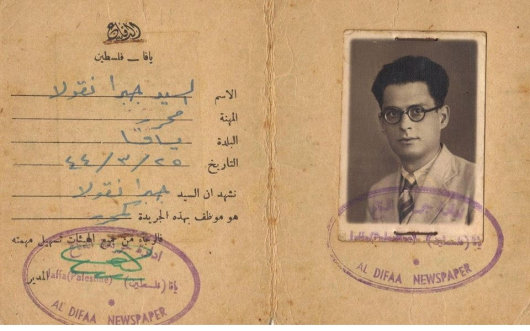 Press Card issued to Jabra Nicola, circa 1944. From Essential Readings on the Left in Mandate Palestine by Musa Budeiri published in Jadaliyya.

Jabra was not a complaisant person; he was stubborn and uncompromising. Nevertheless, he maintained fruitful and comradely collaboration even with people with whom he had serious disagreements. When he joined our organization, we knew he belonged to the Trotskyist Fourth International, while we had no wish to join that international. Any worries that his membership in our organization could lead to a conflict of divided loyalties proved to be unfounded. Jabra always put the good of the revolutionary endeavor above all else, especially above narrow organizational interest. He was absolutely untainted by the slightest smidgen of manipulativeness and uncomradely intrigue. In all my political life I have never met anyone more honest, politically and personally.

His death is a heavy loss to the revolutionary movement in this country, in the region, and the world, and a hard blow to those who knew him closely. But his ideas have become inalienable assets of an important part of the revolutionary socialist movement; and through them he will live posthumously.