Ehud Eingil2021-09-26T08:16:20+03:00June 1, 1974|Categories: Documents|
The text of the open letter was published in Hebrew and Arabic in Matzpen issue 72, December 1974. It was republished in the Matzpen booklet in Arabic “From our struggle against zionism and for socialism“,
March 1978, with the following preface:

On March 22, 1968, the Socialist Organization in Israel affairmed in a statement that “it is both the right and duty of every conquered and subjugated people to resist and to struggle for its freedom. The ways, means and methods necessary and appropriate for such struggle must be determined by the people itself and it would be hypocritical for outsiders – especially if they belong to the to the oppressing nation – to preach to it, saying, “Thus shalt thou do, and thus shalt thou not do.”
This was and remains our position, but our organization, which includes Jews and Arabs, members of the oppressor and oppressed peoples, cannot consider itself an outsider to the struggle of Palestinian socialists who dream of national and social liberation.
We think that it is possible to tell the goals of a struggle according to the ways, methods and means used in order to achieve them, and about these we disagree with those in the Palestinian liberation movement who claim that they stand for coexistence of Arabs and Jews, but use ways, means and methods that do not bring them or us closer to this goal.
Against this background, we wrote the following open letter to the members of the Popular Democratic Front for the Liberation of Palestine.  This was not the first time we wrote to the Popular Democratic Front. During 1969-1970, our organization took part in an open written dialogue with the Front. The dialogue between us was published in its entirety at the time on the pages of Matzpen. After the Black September of 1970, communication was cut off and the dialogue stopped due to the changes in the situation of the Popular Democratic Front and in its positions.
In the middle of 1974, Naif Hawatmeh, the Front’s leader, addressed an appeal to Israeli leftists, through an American journalist, inviting them to start a dialogue between the two sides. This appeal was published at the time in the Israeli newspaper Yediot Aharonot. Shortly afterwards, the Ma’alot operation was carried out.
Three Popular Democratic Front fighters who crossed the border from Lebanon stormed an apartment in the Israeli town of Ma’alot and shot members of the family that lived there. They then took hostage dozens of Israeli teenagers, boys and girls, in a local school building. The Front’s fighters demanded the release of a number of political prisoners held in Israeli prisons in exchange for the release of the hostages. The Israeli government decided “not to respond to their demands” and the Israeli army stormed the school building. As a result, many hostages were killed or wounded during the operation. (The three Palestinians were also killed.)

Matzpen’s open letter to the members of the Democratic Popular Front for the Liberation of Palestine:

We regard it as our political duty to address you publicly, and to speak our mind about the operation of your men in Ma’alot; an operation which, more than any previous one in Israel, in the Occupied Territories and around the world, has aroused much political comment, regarding its character as well as its perpetrators.
Why?
Because for some five years, since the split in the Popular Front for the Liberation of Palestine, your organization has been seen by many as the left-wing focus of the Palestinian movement, as the pole where the revolutionary forces of the resistance organizations are concentrated.
That is why your operation aroused such lively reactions in Israel, both among the various strands of the Zionist camp and among the revolutionary organizations and the left-wing public. It is no coincidence that Golda Meir, head of the very government that had for years been expropriating, oppressing and massacring Palestinians, reacted beyond her habitual way and was not satisfied with her usual epithets, “murderers”, etc., but added: “This is the same Hawatmeh who tries to lure us to a living together of Jews and Arabs.” She did so, in our view, out of fear, albeit hidden, that the Palestinian revolutionary forces possess a weapon that is very dangerous for Zionism: the internationalist alternative that the Palestinian revolutionaries may present to the masses of Israeli Jews; this is the revolutionary socialist program that may rally masses of both peoples: Palestinian Arab and Israeli-Jewish.
The Israeli prime minister made these remarks just hours after the carnage in Ma’alot, in a television broadcast directed at a mass audience. Her face was stern, as if that carnage were decreed by an inexorable force majeure, as if she had nothing to do with this event, as if she were not among those who condemned to death the dozens of Ma’alot victims. But beneath her mask there was satisfaction that the events of that day reinforced her fundamental thesis: “All Arabs are the same… they all want to exterminate us…” etc. etc.
We must be frank: your operation in Ma’alot has intensified and deepened the enmity between the masses of the two peoples and – as we well know from our daily experience – has served Zionism. The operation in Ma’alot has elicited strong opposition and sharp criticism not only of members of our organization, but also of members of other revolutionary organizations. We can also attest that your operation has dealt a severe blow to many in the left-Zionist camp, sincere rank-and-file members. They had been led by recent events – the October war and the shock that followed it – to a better understanding and greater willingness to seek allies among the Palestinian Arab people. They were ready to lend an ear to different voices in the Arab world in general and among the Palestinian Arab people in particular, and some of them had been moving towards revolutionary positions while being willing to abandon Zionist positions. Your existence played a part in this development. Therefore, the knowledge that your organization is responsible for the operation in Ma’alot was a resounding slap in the face for them.
But this is not all.
The history of our era is replete with examples of spontaneous eruptions of oppressed masses, rising up and killing their oppressors. The Ma’alot operation is not of this kind. It was not spontaneous. It was planned and calculated. Therefore we cannot say, as many people often do, that such is the logic of the struggle and that human emotions should be kept out of it. In your Ma’alot operation you disregarded elementary moral principles. This disregard cannot hide behind the – admittedly common – claim that these are bourgeois principles. We cannot accept this claim; because the standards that apply to a spontaneous outburst of an oppressed mass, or to nationalist liberation fighters, are not appropriate to fighters bearing weapons in the name of the socialist revolution.
Here is what you said in your statement to the French ambassador (Ha’olam Haze issue 1917): “We are not killers. We are soldiers of a liberation movement… We believe in Marxism-Leninism and the right of self-determination of peoples in their country, and it is for this we are fighting…”
You must resolve this contradiction, in front of the Palestinian masses and the Israeli masses.
The operation in Ma’alot has a further aspect. The population of this town are for the most part poor workers, some of the most exploited and oppressed in Israeli society, cannon fodder of Israeli policy, they are not responsible for it and do not benefit from it. To the residents of Ma’alot your operation implies that Zionism is their last refuge. If the Palestinian movement does not offer them an alternative of life without Zionism, they will always prefer Zionism for all its dangers and despite the heavy price to be paid for it. They will prefer cross-class “national unity” with their domestic exploiters if they are left without an alternative of a common struggle and living together of Jews and Arabs.
In your Ma’alot operation you betrayed the task you have undertaken: to develop such an alternative and present it to the masses in Israel. Naif Hawatmeh’s interview, published in Yedioth Ahronoth, and the operation in Ma’alot, clearly contradict each other. And as is well known, where there is a contradiction between word and deed, the latter cancels the former. We note this with regret, irrespective of the disagreements between us and the interviewee, which arose prior to the operation of Ma’alot but which need not be detailed here. 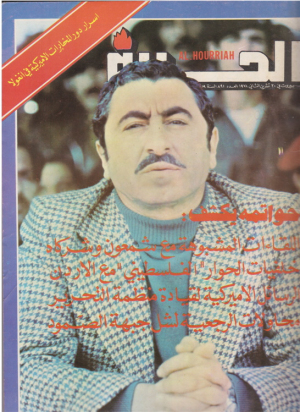 We know that, quite naturally, the Ma’alot operation has not passed just like that, without anyone challenging it among the Palestinian revolutionary left. Therefore we make some of our feelings public, to encourage and help to promote a debate among all revolutionaries in our region, a debate that we believe must transcend this specific issue and encompass all theoretical, political, strategic and tactical questions facing the revolutionary forces in the Arab world and Israel.
We are of course aware of many arguments that will be raised against us, such as the current state of the Palestinian movement, against the background of the “accords” currently being hatched up by the great powers and the governments of the region; and the fact that the revolutionary camp in Israel is small and weak, unable to encourage the development and advance of internationalist revolutionary forces in the Arab world.
We have not touched on these questions here; we address them in another document, which will also be published in our journal Matzpen. The present lines were written for only one purpose: to publicly and unequivocally clarify our opinion that the Ma’alot operation harms the revolutionary struggle and turns every good acreage into a parched wilderness, where the thorns of nationalism abound and the flowers of socialism wilt.
The Israeli Socialist Organization (Matzpen)
June 1, 1974
[Published in Hebrew and Arabic in Matzpen issue 72, December 1974]
FacebookTwitterWhatsAppTumblrPinterestEmail