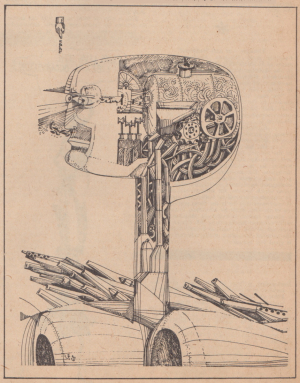 From the Zionist archives:

The following is a translation from an article, published on 29.9.1967 in the Israeli Labour Party daily Davar. The author is Joseph Weitz, who for many years was head of the Jewish Agency’s Colonization Department (the body in charge of the actual organization of Zionist settlement in Palestine). In discussing the possibility of colonizing the newly-occupied territories, the author quotes the following passage, an entry made in his diary in 1940:

“Between ourselves it must be clear that there is no room for both peoples together in this country… We shall not achieve our goal of being an independent people with the Arabs in this small country. The only solution is Palestine, at least Western Palestine [Palestine west of the Jordan river] without Arabs… And there is no other way but to transfer the Arabs from here to the neighbouring countries; to transfer all of them, not one village, not one tribe should be left. And the transfer should be directed to Iraq, Syria and even Trans-Jordan. Money, a lot of money, will be found for this purpose. And only after this transfer will the country be able to absorb millions of our brethren. There is no other way out.”

Commenting on what he had written in his diary 27 years earlier, the author goes on to say:

“From that point of view, the ‘transfer’ solution was discussed at the time and it was supported by B. Katznelson, J. Vulkani and M. Ussishkin [Berl Katznelson was Ben Gurion’s predecessor as leader of the most important Zionist political party, and thus the chief Zionist leader in Palestine; the other two persons mentioned were also very prominent Zionist leaders – Trans.] and some preliminary preparations were made in order to put this theory into practice. Years later, when the UN passed a resolution to partition Palestine into two states, the War of Independence broke out to our great good fortune; and in this war a twofold miracle happened: a territorial victory and the flight of the Arabs. In the Six Days’ War one great miracle happened: a tremendous territorial victory; but most of the inhabitants of the liberated territories remained ‘stuck’ to their places which may destroy the very foundation of our state.”

Students’ department, Paris, October 14, 1969 – Excerpts from a circular to the newly-created Students’ Department in Paris:

Over and above daily action in response to events and Arab propaganda, a plan of action must be laid down for the coming academic year and the main issues must be defined at the outset. Those outlined below are in line with the problems facing the students at the moment: they provide answers to the favourite slogans of Arab propaganda, without assuming a defensive attitude.

“We must admit that our national disease consists in the moral decadence of the Jewish individual as a man; the lack of national consciousness is a logical outcome of this situation”.

“…Consider the young Jew: even though young in age he is already old in spirit – his soul is filled with gloom”.

“…The Jew of the diaspora is a caricature of the normal, natural, man – both physically and mentally. As an individual member of society he is unaware of organization and discipline. He considers himself most intelligent and expects others to bow to him. His distinguishing feature is interminable discussions which become, for him, an end in itself. In overrating himself he underrates others. He is convinced that he is the most perfect being on earth. Our ideal in education is to create a young Jew with well-built muscles, strong will, normal, healthy way of thinking, disciplined. Jewish in heart and soul, initiator of the socialist conception of life, admirer of what is good and beautiful”.

Declaration written by Eli Lobel after the incident at a meeting in Paris (December 9, 1969) where three members of ISRACA were wounded by extremist Zionist thugs.

At the present moment, Zionist strategy in France can be summed up in the slogan: ANTI-ZIONISM equals ANTI-SEMITISM. Having lost the battle on the Zionist front, as it is becoming increasingly clear that the Zionist movement is of a colonial nature and the ally of the most ferocious imperialism, an attempt is being made to discredit its opponents, as anti-semites. Worse still, the long-run target arrived at by this strategy is to persuade the Jewish community that their existence is threatened and that they would do better to emigrate to Israel. Didn’t the managing director of the Ministry of Absorption into Israel, General Uzi Narkiss, recently announce that an increase in emigration by the French Jews was to be expected, the latter no longer feeling themselves to be safe in France, on account of the propaganda of El-Fateh and the leftists?

It is against this background that the acts of the Commando of Jewish extremists have to be seen. Each of the Zionist groups, whether they proclaim themselves on the left or the right, plays its part in the overall strategy. When an official representative of the Union of Jewish Students in France, calling himself “a left-winger”, declares in a public meeting that the people in Matzpen are despicable traitors of their country, this is direct encouragement for the Jewish extremists to turn to action.

After the attack by the fascist-type Zionist commando at Censier, on Tuesday, December 9, 1969, the same National Union of Jewish Students rushed to publish a communiqué – in suspicious haste, barely one hour after the incident, condemning acts which could only “madden people’s minds”. But, as usual, those responsible are in higher positions than the lowly henchmen in exile.

It is the whole Zionist propaganda which is the cause. It is aimed at dividing the forces of the left wherever they exist, and at creating forced situations whereby the Jews become foreigners in the respective countries in which they live.

This is why we must ensure that our answer to actions by fascist-type Zionist commandos is accompanied by an effort at political explanation in depth. Zionism must be denounced daily, all along the line. Whether it be on the right, on the left, or in the centre, Zionism in its form of “punishing Zionism”, directed this time against recalcitrant Jews themselves, is not only an enemy of the Palestinian people, not only a chosen ally of western imperialism, but is also becoming at the present moment an enemy of the Jews and a considerable factor of division of the left wherever it acts.

To the Participants in the International Conference of Jewish Lawyers & Jurists, Israel, August 1969.

Towards a Democratic Solution to the Palestine Problem

[Draft resolution presented by the Democratic Popular Front for the Liberation of Palestine to the Palestine National Congress, September 1969.]

The Palestine National Congress, basing itself on the belief of the Palestinian people in a democratic solution to the Palestine problem, resolves the following:

The Sixth Palestine National Congress, after having adopted this democratic solution, calls upon all anti-Zionist Jews and Israelis to rally around this solution and to engage in the common Palestinian armed and mass struggle for its implementation.