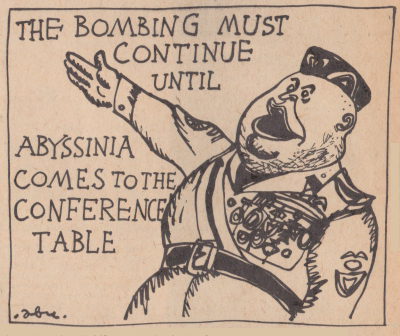 The latest phase of the undeclared war in the Middle East is based upon a profound miscalculation. The bombing raids deep into Egyptian territory will not persuade the civilian population to surrender, but will stiffen their resolve to resist. This is the lesson of all aerial bombardment. The Vietnamese who have endured years of American bombing have responded not by capitulation, but by shooting down more enemy aircraft. In 1940 my own fellow-countrymen resisted Hitler’s bombing raids with an unprecedent unity and determination. For this reason, the present Israeli attacks will fail in their essential purpose, but at the same time they must be condemned vigorously throughout the world.

The development of the crisis in the Middle East is both dangerous and instructive. For over twenty years Israel has expanded by force of arms. After every stage in this expansion Israel has appealed to ‘reason’ and has suggested ‘negotiations’. This is the traditional role of the imperial power, because it wishes to consolidate with the least difficulty what it has taken already by violence. Every new conquest becomes the new basis of the proposed negotiation from strength, which ignores the injustice of the previous aggression.

The aggression committed by Israel must be condemned, not only because no state has the right to annex foreign territory, but because every expansion is also an experiment to discover how much more aggression the world will tolerate.

The refugees who surround Palestine in their hundreds of thousands were described recently by the Washington journalist I.F. Stone as ‘the moral milestone around the neck of world Jewry’. Many of the refugees are now well into the third decade of their precarious existence in temporary settlements. The tragedy of the people of Palestine is that their country was ‘given’ by a foreign Power to another people for the creation of a new State. The result was that many hundreds of thousands of innocent people were made permanently homeless. With every new conflict their numbers have increased. How much longer is the world willing to endure this spectacle of wanton cruelty?

It is abundantly clear that the refugees have every right to the homeland from which they were driven, and the denial of this right is at the heart of the continuing conflict. No people anywhere in the world would accept being expelled en masse from their own country; how can anyone require the people of Palestine to accept a punishment which nobody would tolerate? A permanent just settlement of the refugees in their homeland is an essential ingredient of any genuine settlement in the Middle East.

We are frequently told that we must sympathize with Israel because of the suffering of the Jews in Europe at the hands of the Nazis. I see in this suggestion no reason to perpetuate the suffering. What Israel is doing today can not be condoned, and to invoke the horrors of the past to justify those of the present is gross hypocrisy. Not only does Israel condemn a vast number of refugees to misery; not only are many Arabs under occupation condemned to military rule; but also Israel condemns the Arab nations, only recently emerging from colonial status, to continuing impoverishment as military demands take precedence over national development.

All who want to see an end to bloodshed in the Middle East must ensure that any settlement does not contain the seeds of future conflict. Justice requires that the first step towards a settlement must be an Israeli withdrawal from all the territories occupied in June 1967. A new world campaign is needed to help bring justice to the long-suffering people of the Middle East.

[This statement on the Middle East was read on 3rd February, 1970, the day after Bertrand Russell’s death, to an International Conference of Parliamentarians meeting in Cairo.]