Israel supporting the US in Vietnam 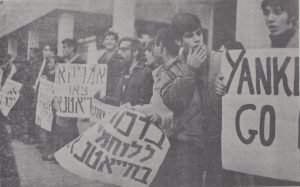 Out of Vietnam. Matzpen members in a demonstration in front of the US embassy in Tel Aviv

In spite of the usual smoke-screen and the systematic misrepresentation of facts, so prevalent in the Zionist press in Britain, one is sometimes given the opportunity to see through this smoke-screen.

Such a rare occasion was a short back-page article in the Jewish Chronicle on Friday, November 21st. Estimating this article to be of relevance in combatting Zionist ideology and in emphasizing the contradictions underlying Israeli politics, we reprint it here in full, without comment.

from our correspondent in Jerusalem

Jerusalem is embarrassed by the release to the U.S. press of a letter from Mrs. Golda Meir, the Israeli Prime Minister, to President Nixon congratulating him on his statement of Vietnam policy on November 3 and expressing the view that the speech “contains much that encourages and strengthens freedom-loving small nations the world over”.

The hope here, apparently, was that the letter would remain secret, and that Mrs. Meir would achieve the aim of pleasing Mr. Nixon without antagonizing that section of American public opinion opposed to the Vietnam war, which includes many Jewish and non-Jewish friends of Israel.

Critics of Mrs. Meir’s letter recall Israel’s unconditional and almost lone support for France during the Algerian campaign, support which continued even after warnings that President de Gaulle was preparing a volte-face in Algeria.

After embarrassed denials that the letter had even been sent, the Prime Minister’s office released the text on Tuesday afternoon.

Reactions range from total disapproval to justification based on opportunistic reasons. The evening newspaper, Maariv, which is usually pro-American, denounced the letter in an editorial comment as being out of place.

Haaretz, the independent daily, on the other hand, justified it on the grounds of political and security requests by Israel to the White House, which were now under consideration.

The following are translated extracts from an article by the Israeli writer Y. Bar Yossef, published in Yediot Ahronot on November 7th, 1969.

I have had the opportunity of talking to some intellectual American tourists about the Vietnam problem. I read American and English weeklies and monthlies regularly, and the reason for that militant opposition, practically a physical and mental repulsion to the Vietnam war, still escapes me…

The most important of the views I have heard runs like this: “Since there is no chance of beating the Vietcong it is better to retreat unconditionally, to get out of that slaughter, and save the lives of thousands of young Americans. Death in battle is pointless if the battle is pointless.”

The intellectuals add to this the view that the war is one of support for a corrupt regime, the Northerners are idealistic and pure, while the Southerners are corrupt.

… I asked these American tourists: “And how about communists’ armed expansion? If the Americans leave Vietnam, who will stop the Communist movement from spreading all over Asia and Africa and Europe, in fact over the whole world?

Communism is not trying to gain hearts through logical argument, through demonstrating to the world the blessing brought to the worker and simple labourer by Communist regimes.

… The world Communist movement takes the same road that Islam took, pushing its beliefs through by force… This process is world-wide, and if it is not opposed by force, what is to stop it from conquering the whole world?

… To us in Israel the Americans’ approach to the Vietnam problem is of the utmost importance; “The God of History” has bound us and our very existence to “the Western camp”. If the West (i.e. the U.S.A.) will surrender in Vietnam and leave Asia, and then the rest of the world [will be] open to the pressures of the Communist camp, we too will be a prey to the whims of the Soviets or the Chinese. The implications of this are not very heartwarming, not even to an Israeli communist.

We can see then that we are not unrelated to the Vietnam problem. We can hardly influence developments there, but every step taken is of the utmost importance to us. We should not, therefore, be so happy that the opponents of the Vietnam war are winning, if they really are.