The Other Israel (pamphlet): Israeli Critique of Zionist History and Policy – The Israeli Socialist Organization (Matzpen) 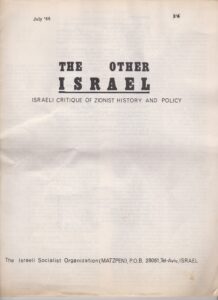 Interpretation of the Israeli-Arab conflict by Israelis can be divided into two categories:

The first version, based on the assumption that minority persecution is inherent in “Human nature”, accepts anti-Semitism as a permanent fact of life. Insists on preserving “Jewishness”. It is nationalist.

The second version is based on the assumption that man makes his own history, including the interpretation of it, as well as his “—-ishness”. It considers Zionism and “Jewishness” as alianations. It is internationalist.

This publication aims to untie the emotional knot which has been tied into a political conflict, by providing a critical analysis of its history.

The Israeli Socialist Organization wa formed in Israel in 1962. The membership consists of Jews and Arabs.

It Publishes a monthly (Matzpen = compass) in Hebrew, and occasional publications in Arabic. It aims at socialist revolution in Palestine and throughout the Middle East, and is openly anti-Zionist.

Although individual members’ articles reflect the spirit of the I.S.O., the organization is responsible only for its signed statements.

The Palestine Problem and the Israeli-Arab Dispute – I.S.O statement, 3.5.1967

Some Remarks concerning the Left in Israel

Joint Israeli-Arab Statement on the Middle East Crisis – by The I.S.O. and The Palestinian Democratic Front (P.D.F.), 3.6.1967

Joint Resolution: Solidarity with the Palestinian Arab People, May 12th, 1968